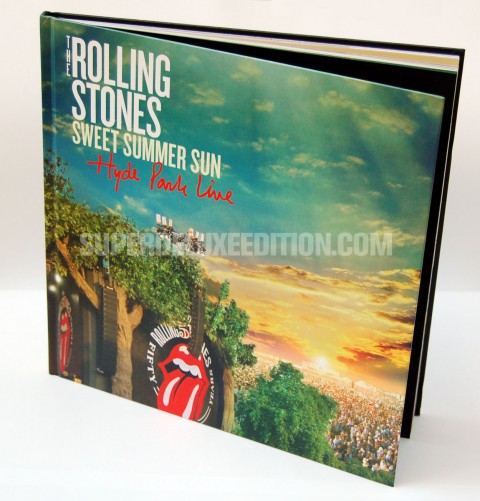 The Rolling Stones‘ celebration of their 2013 London Hyde Park gigs is out this week.

Sweet Summer Sun: Live At Hyde Park has been issued in an enormous number of formats, but putting vinyl to one side, the pick of the bunch was this deluxe edition which combines two CDs of audio with the flexibility of the show on DVD and Blu-ray. Actually, to be totally accurate the US deluxe edition is the best version since it uniquely adds a DVD of the 1969 Hyde Park gig to make the North American edition a five-disc set.

This review and the photos in the gallery below refer to the UK/European deluxe.

Across the two CDs you get 18 tracks from the gigs remixed by Bob Clearmountain. 15 tracks are included in the concert film, but you get three extra as bonus performances.

Eagle Rock and director Paul Dugdale have done a superb job with the concert movie. It’s an evocative piece of filmmaking which starts with the aftermath of ‘Stones triumphant 2013 Glastonbury performance. “I’m not particularly patriotic but you still get the smell of your home turf” points out Keith Richards. The band are well aware that Hyde Park is something special with the memories still vivid from their 1969 gig “There were half a million there that night… mind you it was free!” the guitarist remembers. The five minute intro piece with voiceovers from all the band is so good, you’re almost sorry when the gig starts. The announcer is careful to welcome the band BACK to Hyde Park and things kick off smartly with Start Me Up.

It’s hard to imagine how anyone could have done a better job with this film. There seem to be cameras everywhere (without being intrusive) and there are some great aerial shots looking down on Charlie and his drum kit. The visuals manage to be intimate while evoking the scale of the event at the same time. On blu-ray the hi-def picture is pin-sharp and everything looks very cinematic on 16:9 Widescreen. The on-stage performances are occasionally intercut with some super slo-mo shots of fans (notably on Ruby Tuesday) which works very well.

Jagger hams it up at the beginning of Honky Tonk Women by putting on a similar white top to the one he wore in ’69 “to see if I can still fit into it…” and as the sun sets he gets his guitar out and the band break into a suitably sleazy Miss You.

The concert ends with an unbeatable run of Jumpin’ Jack Flash, Sympathy For The Devil, Brown Sugar, You Can’t Always Get What You Want and Satisfaction.

Make no mistake this release is all about the film – treat the CDs as a nice-to-have bonus.The DVD is NTSC region 0 and comes with Dolby Digital 5.1 and DTS surround. The Blu-ray has LPCM Stereo and DTS-HD Master surround.

The one disappointment is the book itself. The pages have a rather ‘rough’ feel to them, but most surprisingly the colour photos are rather grainy and lack any ‘wow’ factor. Whether this is down to digital printing or having to extract stills from the hi-def movie footage it’s hard to say. The fact that this set offers reasonably good value (available for around £30) means that we can live with a very average photo book.

Whichever version of this release you opt for you are not going to be disappointed with the film. Highly recommended.