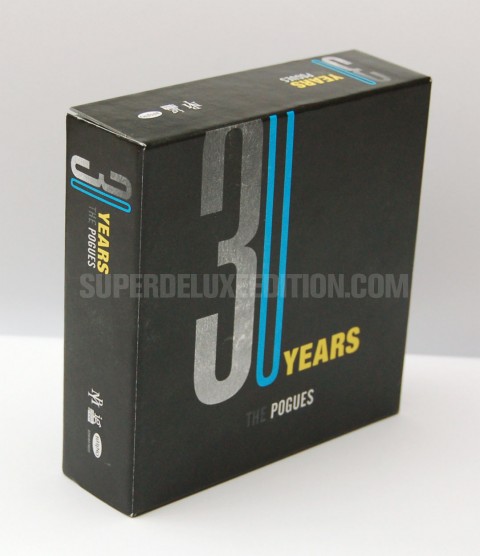 This set collects the seven studio albums from 1984’s Red Roses For Me to Pogue Mahone from 1996 and adds a previously unreleased live album The Pogues with Joe Strummer – Live In London (recorded in December 1991).

There have been Pogues reissues before of course, notably in 2004 when the albums were re-released on CD with bonus tracks. Rhino also issued an Original Album Series collection in 2009 that brought together the five Shane MacGowan albums in the usual card slipcase packaging.

So while in some ways 30 Years treads familiar ground, there is still much to recommend it. First off the band were involved in the project, and were keen to have their say. The decision to revert back to ‘just’ the albums and lose the 2004 bonus tracks was theirs, for instance. Another example of the band’s input was the cover design of the box. The literary types amongst you might notice that the typesetting and design is ‘inspired by’ an edition of James Joyce’s landmark work Ulysses.

Also apparent is that some effort has been put into the packaging. The ultra-cheap ‘vinyl replica’ sleeves found in many sets (including the original album series) are improved significantly. Although not historically accurate, every album here has been configured as a gatefold, allowing for full lyrics to be printed inside (except for the live album). This is a massive improvement over the Original Album Series sleeves. Colour and photographic reproduction is much better, and the rear covers revert to being actual replicas of the vinyl rather than approximations. If I Should Fall From Grace With God has the type reduced in size and now denotes ‘side one’ and ‘side two’.

The CDs reside in a clamshell box that opens right to left. There is no separate booklet with this set. Perhaps the excellent notes from the 2004 reissues could have been collated and supplemented the musical content within.

Talking of musical content, 30 Years is the only place you will find newly remixed versions of Peace And Love and Red Roses For Me. The late Philip Chevron, in some new notes for Roses, states that the mix ‘lacked the hoped for touch of magic’  while MacGowan’s voice was deliberately kept quite low in the mix of Peace And Love, something which producer Steve Lillywhite has said he regrets. Lillywhite has remixed the latter album and corrected this perceived mistake. It sounds great (a fair bit louder) and the vocals are much more prominent, although to be honest we never really minded the slightly muddy-in-the-mix original. Red Roses For Me is a subtler remix but still evident with MacGowan’s vocals on The Auld Triangle a bit more in your face and less sweetened than the original. In Chevron’s words the ‘artificialness’ has been reduced across the board.

Overall this is a very nicely prepared set. While the sleeves aren’t up to Japanese mini-LP CD standard (but neither is the price), it’s clear that time (and money) has been invested in making 30 Years a cut above the average. The band’s involvement, with notes from Philip Chevron and James Fearnley, does make a difference. The two remixed titles were created at the behest of the artist (and producer) and so for the diehards at least offer something different, since you will of course own all of this already. The same goes for the live album.