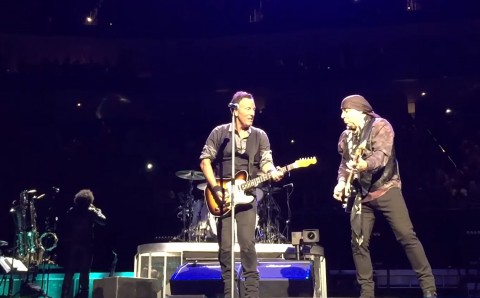 Bruce Springsteen last night opened his The River tour with a moving tribute to David Bowie, reminding the audience that he “supported our music way, way, way, back in the very, very beginning ” before covering one of his songs, which you can watch below.

Bruce recalls how “he rang me up and I visited him down in Philly while he was making the Young Americans record. He covered some of my music… It’s Hard To Be A Saint In The City, Growin’ Up… He was a big supporter of ours. I took the Greyhound bus down to Philadelphia, that’s how early it was…”

Bruce Springsteen and the E Street Band then went on to perform a storming version of Bowie’s Rebel Rebel.

If you wish to hear David Bowie’s version of Springsteen’s It’s Hard To Be A Saint In The City, you’ll find it in SDE’s Top 10 Lost Tracks of David Bowie

DEALS / Italians do it better