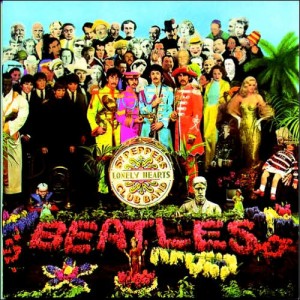 In this final day of the reissue wish list series (it is the twelfth and last day of Christmas!) I thought the time had come to celebrate a really big release.

It is surely only a matter of time before EMI/Apple Corps decide to ‘celebrate’ The Beatles’ albums in this most indulgent of formats. The Mono Box proved that, despite economic downturns and austerity measures, when it comes to the fab four, there are always plenty of fans, collectors, enthusiasts and audiophiles who can find the cash to pursue their favourite musical hobby.

And if you are going to choose one album as a place to start a series of Beatles Super Deluxe releases, then look no further than the psychedelic burst of energy that is Sgt Pepper, recorded when John, Paul, George and Ringo still actively enjoyed working together. Free from what had become the misery of touring, they gleefully experimented with recording techniques, played with conceptual ideas (although it’s not really a concept album) and redrew the boundaries of what a pop record could look and sound like.

Pepper was such an event, and such a statement, with the Peter Blake pop art cover, the gatefold sleeve, the lyrics printed on the back, the bespoke-designed inner sleeve (by Dutch design collective The Fool) and the cardboard cut-out moustaches, stripes and badges. It lends itself perfectly to the excess of the Super Deluxe Edition.

So where to start? What to include? Here is how I envisage the ultimate Sgt. Peppers Lonely Hearts Club Band Super Deluxe Edition:

Disc Four (CD) The evolution of Strawberry Fields Forever:
A take-by-take guide through the creative process of the ground-breaking single.

So there we have it. This 7-disc, double-vinyl set would be housed in a sturdy lift-off lid box (as per Pink Floyd). All CDs/DVDs/Blu-ray discs would come in individual digi-packs for on-shelf storage. Vinyl records sleeves would exactly replicate the original.

Expensive, yes. But a splendid time is guaranteed for all.