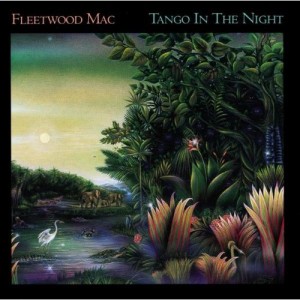 Fleetwood Mac’s Tango In The Night is 25 years old in April 2012, and becomes the fifth album in my reissue wish list for next year.

Maybe it’s not the connoisseur’s choice, with it’s ‘80s production sheen, but the album sold massively well on the back of a never ending stream of singles, a few of which hit the top 10 on both sides of the Atlantic. In fact remarkably, Tango In The Night is the second best selling Fleetwood Mac album after Rumours.

Although it may have started out as a Lindsey Buckingham solo album, the finished article, like the best of ‘70s Mac, has songwriting and vocal contributions from Christine McVie and Stevie Nicks, as well as the significant involvement of Buckingham himself (including co-producing with Richard Dashut).

In the last ten years or so, Warners have reissued expanded versions from the seventies, including 2CD versions of Rumours and Tusk. I am hoping that there is enough interest to continue this approach with Tango In The Night.

Even without any demos or work in progress/alternates there is already more than a CD of previously released b-sides and remixes, mainly issued on the vinyl 7inch and 12inch singles from the album. These are desperately due a digital release.

The proposition for a 25th Anniversary Tango In The Night is:

A third and final disc would be a DVD of all the promo videos and possibly some live footage, although Lindsey Buckingham didn’t participate in that tour so, this might not happen.

If the band and label were willing to open up the archive, in terms of demos and work-in-progress, then there would be a very real possibility of a larger super deluxe edition to include a further CD of demos / alternates and possibly a DVD for a 5.1 surround mix and why not a hi-res 5.1 Blu-ray?

The album had a very broad appeal in 1987/8 and in the UK ended up being one of the best selling of that decade.

A special deluxe reissue should therefore have considerable commercial potential. It’s surprising that it has not been done already, but surely on the 25th anniversary the time has now come.