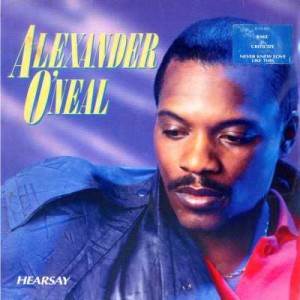 Hearsay was released in 1987 and was an R&B and pop phenomenon, particularly in the UK, where the four hit singles (Fake, Criticize, Never Knew Love Like This and The Lovers) were all over the airwaves and played in clubs for the best part of 12 months. The Jimmy Jam and Terry Lewis produced album was so successful, that three further singles (Hearsay ’89, What Can I Say To Make You Love Me, and Sunshine) were released almost two years later and all charted.

The album has virtually no filler and is set to the backdrop of a party. This works really well, and side one concentrates on Alexander having a hard time with his ‘girl’. She’s a fake, constantly criticizing him… he reassures her that what she’s hearing is “nothing but hearsay”.. you get the idea. Lots of party noises and chatter fade in and out of the songs.

Side two is where things mellow out. The party is slowing down, and Alexander gets all romantic – Never Knew Love Like This, Crying Overtime and the final track When The Party’s Over.

This was one of those albums that you’d play before going out and then hear much of it again when you were out. A career high for Alexander O’Neal – a massively talented singer – and arguably for Jam & Lewis as well.

The album was out of print for some time and has been reissued (a simple one disc with no bonus tracks), but it deserves some tender loving deluxe treatment for the 25th anniversary, rather like Big Break Records/Cherry Red have been doing to albums like Breakout by the Pointer Sisters.

A thoughtful two or three disc reissue with all the remixes commercially available, is what is called for. Such a deluxe issue would also include the All Mixed Up remix album of Hearsay that was released separately. A DVD of videos and TV appearances would finish things off nicely!

The Pretenders / Vinyl box set After a few delays, this 9LP vinyl box…