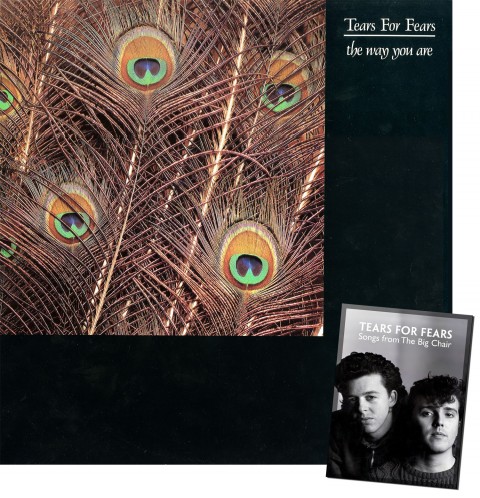 Earlier this year SDE Editor Paul Sinclair spoke to Roland Orzabal, Curt Smith, producer Chris Hughes and A&R man Dave Bates about Tears For Fears’ second album ‘Songs From The Big Chair’. These interviews resulted in a fascinating and often candid commentary on the writing and recording the album. You can read the full ‘in their own words’ feature in the the booklet that forms part of the forthcoming super deluxe edition box set.

Exclusively for SuperDeluxeEdition.com readers, here is an extract from that text, with Roland, Curt et al discussing a song that didn’t end up on the album – the 1983 single The Way You Are which was recorded and released between The Hurting and Songs From The Big Chair.

[TFF Producer] Chris Hughes: “Dave Bates said, ‘Roland’s got this new song, it’s really interesting, it’s got a kind of interesting rhythm to it, it could be a single’ and I remember thinking that it feels like the first thing he has written since The Hurting, and people are investing too much belief in it. I saw them perform it live at The Lyceum and I thought it was okay – quite exciting – and we set about in the studio to try and make it make sense. I think it was ill-conceived.”

Roland Orzabal: “For some bizarre reason it was considered to be a good idea [laughs]. The chart position [it reached number 24] reflected how it good it was, which was a shock to us because we’d had three top five hits, or something. We were experimenting in the studio – perhaps a little too much – trying to work on sounds and textures, when we maybe should have been writing more melodic pop songs. We made a similar mistake with Mothers Talk, which was perhaps a taster of things to come, because we spent an awful long time on a song that maybe didn’t warrant it. The first version of Mothers Talk actually had a lot in common with The Way You Are.”

Curt Smith: “It was undoubtedly a mistake to do it. I don’t think we’re a singles oriented band. We tend to look at a project as a whole, which is this big longer piece of music separated into tracks. Doing one song is really against all the things we stand for and the way we work.”

[TFF A&R Man] Dave Bates: “The Way You Are was recorded at The Farmyard Studios in Buckinghamshire. It’s my least favourite Tears For Fears song, although they definitely liked it at the time. Every writer has no real perspective of what’s great and what’s not, because every one of them is their baby.”

Chris Hughes: Roland wrote it, and wanted it to become something, with good heart. We tried to make it work and it was done with good intention but it just wasn’t one of those songs where you thought ‘yes, this is obviously going to work’. So I think it was uphill.

Curt Smith: At that point the record company were desperate for any product, and accepted something that was really very substandard.

Dave Bates: I didn’t express any reservations at the time. The record company are saying ‘we need a hit, and we need it now’ and this is the only thing I’ve got. I’m going to convince everybody that this is great. They have to totally believe that they are on to a winner. You can have doubts, but you can’t ever go expressing them. In fact the band used to call me ‘grave doubts’ because I used to have grave doubts about things!

Chris Hughes: I don’t remember the band ever sitting around going ‘that was a dismal failure’. It was put out, got played on the radio a few times and fans quite liked it. I don’t think we sat around thinking this is a definite point at which we need to change direction and do something else.

Curt Smith: We got over it and managed to go on and have more success despite that song. It’s one of those things that we can’t take it back, but we wish we hadn’t done it.

Dave Bates: I think during the time of recording Songs From The Big Chair it was decided it wasn’t going to fit on. I think stylistically, it’s got nothing in common with anything else on the album.

Interviews by Paul Sinclair. The Way You Are wasn’t on the original issue of Songs From The Big Chair but makes an appearance on the super deluxe box set a total of six times; original single version, DJ Edit, Extended Version, a previously unreleased early mix, the promo video and a rare Top Of The Pops performance.

Songs From The Big Chair is reissued on 10 November across a number of formats (see below for details and track listings.