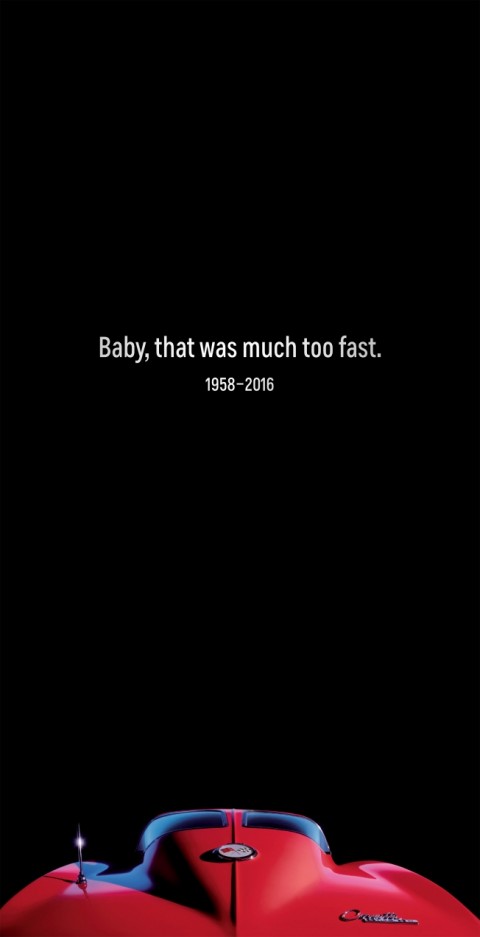 When big brands ‘pay their respects’ to musicians or other artists who have died, in print or online, it’s normally an occasion to roll your eyes – and can often border on the crass – but this ‘ad’ that Chevrolet ran on Friday in the Minneapolis Star Tribune, The New York Times, the Detroit Free Press, the Los Angeles Times, and USA Today after the shock news about Prince, was brilliant and very moving. It’s perfect and says everything in six short words – words written by Prince, of course, in Little Red Corvette.

Because it really was too fast. No one should die at 57 and as has been said by so many commentators, we are left to wonder what could have been. Unlike Michael Jackson, who never really looked likely to produce anything approaching his best work in the last 15-20 years of his life, there was always that feeling with Prince that he really was capable of that, if he wanted to do it. Sure, his output was frustratingly variable, but there were still some fantastic songs and albums in later years – you just had to be willing to search them out.

Who would have thought that after the under-promoted The Rainbow Children from 2001 and a few years of messing around with instrumental albums (Xpectation, N.E.W.S.) Prince would go on to have his biggest hit album since 1991’s Diamonds and Pearls with Musicology? In fact, for a while, it really looked like the ‘old’ Prince was back because he followed up Musicology with 3121, in my opinion, an even better album (he did also issue a couple of download-only albums in between – The Chocolate Invasion, anyone?) 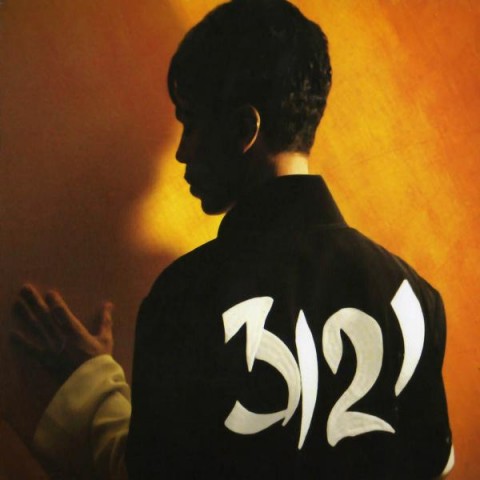 3121 was another album with a decent front cover (not some computer graphic generated abomination) that was distributed by a major label (in this case Universal). Most importantly, it was another ‘tight’ 12-track long-player with some brilliant tunes and arrangements that echoed some of his best work from the past, like the title track, Black Sweat, Love and The Word. Fury even features some 1999-style synths. In fact, if you ‘gave up’ on the purple one in the mid-nineties I’d highly recommend you start with 3121 – I’ll put my neck on the line and state that it’s a better ‘listen’, as an album, than Diamonds and Pearls, despite the latter’s high points of Gett Off and Money Don’t Matter 2 Night.

Much of this good work was rather undone in the following years with Prince giving away Planet Earth (2007) and 20Ten (2010) in the UK with national newspapers. Probably financially rewarding for him, but as usual anything ‘free’ tends to be rather undervalued and just having a disc in a cheap card wallet wasn’t exactly satisfying. Released between those two, Prince reverted back to his penchant for issuing triple albums and the confusing Lotusflow3r three-CD package came out, where fans were force-fed a Bria Valente long-player. Inevitably, hidden amongst the hours of music was some great stuff.  Check out Colonized Mind from Lotusflow3r, for instance.

Like many in their mid-forties, I first got into the music of Prince via the singles 1999 and Little Red Corvette. I’m not sure how 1999 failed to be a top ten hit in America, but those songs were absolutely massive in the UK (both peaked at number two). I was young, I had no idea about which albums the songs were from, but I just remember every ‘new’ Prince single I heard on the radio or saw on Top of the Pops was AMAZING. We ‘skipped’ a few singles from 1999 here in the UK, so Prince’s run of 45s were as follows: 1999, Little Red Corvette, When Doves Cry, Let’s Go Crazy, Purple Rain, I Would Die 4 U, and Take Me With U. Unbelievable. Thirty-five years later their power remains undiminished. Big choruses, superb melodies, and amazingly creative arrangements. The funny thing was, I wasn’t really buying his music at this point, just absorbing it through radio and TV (perhaps bizarrely, I think the first Prince single I bought was the rather forgotten Mountains from Parade).

A bit like David Bowie, whose commercial breakthrough came with his fourth album, I would later discover that Prince already had a long history and had himself issued four albums, starting with 1978’s For You. I would explore that music much later, since there was hardly time to pause for breath as Prince released a new album every year for most of the 1980s.

The creativity was like a tap that couldn’t be turned off. Prince didn’t fall into the trap of trying to create ‘commercial’ albums designed to outsell previous efforts, rather he followed his instincts and did whatever the hell he wanted. 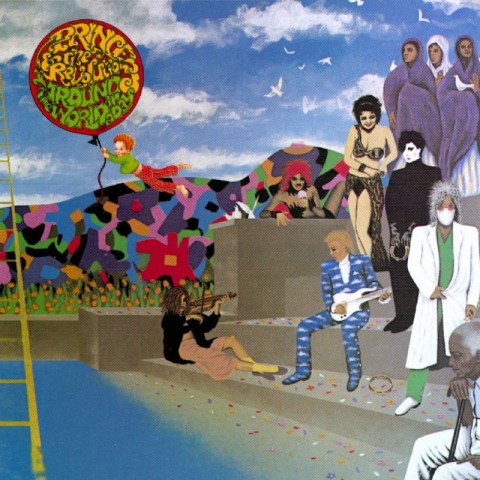 To that end, 1985’s Around the World in a Day was issued without a lead single and was more experimental and ‘psychedelic’ than previous efforts, as the colourful cover reflects. It was hardly Neither Fish Nor Flesh though, and still sold more than 7m copies worldwide and boasted a big hit single in Raspberry Beret. It has to be said that it did do much better in America, with the UK rather resistant to the charms of the singles, especially Pop Life, which should have been a much bigger hit than it was (it peaked at number 60).

Prince was a bit like those businessmen who say that you need to be prepared to fail in order to succeed. He seemed almost unbothered by failure, so while his second film, Under A Cherry Moon flopped badly, he just shrugged it off and had a massive worldwide hit single with Kiss from the ‘soundtrack’ album Parade. Kiss was deservedly a number one in America and hit the higher reaches of the charts almost everywhere, but the other singles from the record, in particular Mountains and Anotherloverholenyohead, weren’t big hits at all. No matter, Parade is wonderful and was justifiably acclaimed. It contains the now poignant piano ballad – and fan favourite – Sometimes It Snows In April. 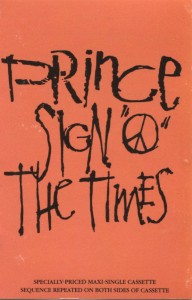 Prince was so prolific, had such a high profile, and was producing such interesting work, that he was firmly in ‘what’s he going to do next territory’. A new album was a major event.

However, this was the 1980s; no internet and no rolling news coverage. I remember walking into HMV in London one day and seeing this import cassette single (left) on the shelves in the Prince section. Yes, there was an era when the first time you’d know about a single was when it was sitting on the shelves waiting to be bought. No ‘pre-order’, no three months of being bombarded with information via ‘social channels’ – just a new product on the shelf which, when you saw it, would result in that momentary ‘fizz’ of anticipation, because you were having to process so much exciting information at one time. In this case: 1. Prince has a new single out. 2. It’s not off the old album, it’s brand new. And 3. It’s right in front of me and I can and buy it right now and play it when I get home! It also looked cool – with its groovy typography and the mysterious use of the CND (peace) symbol.

Like many people, I consider Sign ‘O’ The Times to be Prince’s best album. It just has everything, including the stunningly good lead single, with its brilliant lyric, full of social commentary. The album jumps around in terms of styles but it’s never to its detriment – it even has a 9 minute live track on ‘side 4’ of the record (It’s Gonna Be A Beautiful Night), which, on paper, sounds like a terrible idea. It’s one of the few double albums that should be a double, and is also an advert for being A&R’d by a major label, because Warners’ commercial instincts, in insisting that Prince reduce his proposed Crystal Ball three-LP set to a double, was spot on.

Lovesexy’s Alphabet St. was arguably the last brilliant single of Prince’s ‘imperial’ phase, but while the albums in the 1990s got patchier, the singles could still impress. Thieves in the Temple, Gett Off, Sexy MF, Money Don’t Matter 2 Night, Letitgo, and The Most Beautiful Girl In The World aren’t bad when you’re supposedly past your peak!

Prince’s single-mindedness was largely a positive force, but his name-changing and power struggles with Warners was something of a distraction and hurt him commercially. His fantastic duet with Nona Gaye, Lovesign could have been another massive hit on the back of The Most Beautiful Girl In the World, but the major label (not unreasonably) refused to allow him to license it out to NPG (it was eventually issued on the 1-800 New Funk compilation and a remix can also be found on the 1997 Crystal Ball set).

The nineties were dogged by these kind of problems and albums bounced from grudging ‘contractual obligation’ efforts like Come and Chaos and Disorder to bloated sets like Emancipation. But, as discussed at the beginning of this piece, with all these distractions behind him, Prince’s output definitely improved in the following decade, particularly in the mid-noughties, even if it never really felt like he solved the problems in how best to release his music (major label, internet, independently, cover-mount CD, give it away at concerts etc.).

Prince will be remembered as an iconic superstar whose stature was matched by his talent and abilities. He was a virtuoso musician (master of all trades, jack of none) and an amazing and prolific songwriter. His music will endure and like so many greats before him (Beatles, Bowie, The ‘Stones) he produced his best work in his twenties. It is this output, in particular his run of albums from Purple Rain to Lovesexy, that secures his place at the table of the all-time greats.

So goodnight, Prince. I Wish U Heaven. 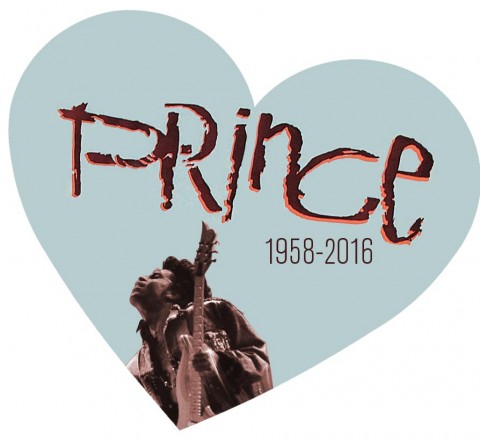