The headline news this week was the announcement of Five Years 1969-1973 the first in a series of David Bowie box sets from Parlophone. In general, it’s always quite exciting when a major release of one of your favourite artists is announced, but once the dust had settled opinion was rather divided on the merits of the new set which contains Bowie’s first six RCA studio long-players, two live albums and a new two-disc compilation.

The crux of the issue is the question of ‘who is the box set aimed at?’ Is this for ‘the fans’ or the casual music buyer who has a few greatest hits collections and the odd album but might be up for a deeper delve into David’s run of studio albums, which from 1969 to 1980 reached a standard of consistency and creativity that only The Beatles could lay serious claim to surpassing in their seven-year domination of the 1960s.

In my opinion, what has happened is that Parlophone have failed to ‘pick a side’. They have opted for relatively lavish presentation – quality Japanese style mini-LP CDs and 180g ‘audiophile’ vinyl (mostly analogue mastered according to the label) – which appeals to collectors, but have offered no bonus tracks on the albums, which doesn’t.

A casual fan might want to explore The Man Who Sold The World or Aladdin Sane, but do they also want two live albums (Ziggy Stardust: The Motion Picture and Live Santa Monica ’72) and Re:Call 1 the double-disc compilation of rarities? Probably not. But they have no choice; all this stuff is bundled together seemingly to create an expensive box. If you buy the CD set you are paying £100 for the six studio albums, two live albums and the compilation (for the LP set you can double that). 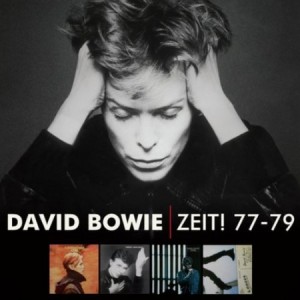 Two years ago EMI issued Zeit! a five-CD compilation which contained the so-called ‘Berlin Trilogy’ (Low, Heroes and Lodger) from the late 1970s and Stage the double live album of that era. Fair enough, there was no remastering and the ‘box’ was little more than a card slipcase to hold CDs already easily available, BUT this could be picked up for less than £15. Or £3 a CD. For collectors this was a waste of time but for the ‘casual fan’ this was a great deal. To compare, the new Five Years box wants £8.33 for each CD included.

Even if casual fans love the new box and are prepared to shell out for it, the Bowie die-hards haven’t really got much to cheer about. On the plus side we will get new remasters for 1970’s The Man Who Sold The World and follow-up Hunky Dory, but it does appear as if we have to buy a whole load of albums all over again, many of which have been issued in superior deluxe editions in the last five or six years.

Take the Live Santa Monica ’72 album. I bought this in 2008 in a nicely designed limited edition stickered box, containing poster, booklet and the newly mastered CD complete with George Underwood illustrations on the sleeve. The new version in Five Years isn’t going to surpass that packaging and is likely to sound either identical or very similar. What about the David Bowie album of 1969 (for years know as Space Oddity with the era-busting Ziggy cover)? I have a two-CD deluxe edition issued a year after Santa Monica. This included 15 bonus tracks of which only four make an appearance on the Re:Call 1 compilation included with Five Years. Even more recently in 2012 The Rise and Fall of Ziggy Stardust and the Spiders from Mars had a splendid reissue which included an amazing vinyl remaster, a 5.1 surround version of Ken Scott’s 2003 mix and some bonus tracks. Again, the 5.1 is absent from the new box, the same remaster is used again and of the four bonus tracks only one (Velvet Goldmine) is in Five Years.

Without wanting to labour the point, the new box clearly is going to struggle to appeal to collectors, but Parlophone simply couldn’t resist including an ‘exclusive to the box’ compilation to try to entice that very group to buy. Maybe it’s a good thing that even that collection misses the mark, spending much time rehashing bonus tracks that have been doing the rounds since 1990, when EMI picked up the international rights to Rykodisc’s Sound + Vision reissue programme. There are 120 tracks in Five Years and ONE of them is previously unreleased – a single edit of All The Madman.

Despite all of the above – the curse of the collector strikes – I will still swallow hard and pick up the vinyl version of Five Years. Perversely, it may be the most expensive variant, but to me it offers the best value. I’m awash with Bowie CDs (Rykodiscs, Japanese mini-LP CDs (with Disk Union boxes), various noughties reissues..) but apart from a handful of average condition RCA LPs and the aforementioned Ziggy LP+DVD combo don’t have much in the way of vinyl.

It seems as if Parlophone will spend the news 12-24 months issuing further Bowie box sets. Presumably these will include more ‘rarities’ compilations with Re:Call 2, Re:Call 3 etc. Maybe after that we can get down to the serious business of producing all-encompassing deluxe sets of individual albums that have been shockingly neglected for decades – The Man Who Sold The World, Hunky Dory, Low, Heroes and Scary Monsters (and Super Creeps) to name but five. And that’s before we even start thinking about the 19 – extended dub mix – 80s.