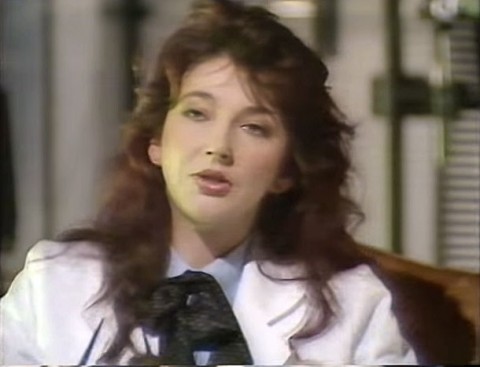 Legendary UK broadcaster Terry Wogan has died aged 77. The Irishman hosted the BBC Radio 2 breakfast show for 12 years between 1972 and 1984 and his popular TV chat show Wogan ran for three nights a week between 1985 and 1992.

The popularity of this show meant it was a highly regarded slot for music promotion, and crucially, unlike Top Of The Pops, acts could perform on the show (virtually always lip-synching) before their single had entered the UK top 40. Here, SDE presents you some of our favourite Wogan performances over the years…

Tears For Fears promote the lead single from their third album The Seeds of Love. Bizarrely, Manchester poet/artist Edward Barton is ‘playing’ guitar (to the right of Roland Orzabal). Songs From The Big Chair producer Chris Hughes is on the drums (unlike Barton he at least actually plays on the recording!).

Kate‘s 1986 single was issued to promote The Whole Story. She had made an impressive, and no doubt expensive, video for Experiment IV, so could have been forgiven for just ‘phoning in’ her performance on Wogan. But the simple, yet effective device of the desk and the white coats works superbly and Kate looks amazing!

The Pet Shop Boys promote the first single from their mini/remix album Introspective. I used to have one of those Suburbia T-shirts that the performers are sporting (sadly now lost).

Sue Lawley stands in for Terry and Paul McCartney gets a massive slot to promote 1989’s Flowers in the Dirt. A nation groans as she says ‘bring on the dancers’ and the dancers groan as they try to boogie to Figure of Eight.

Despite Lloyd Cole and the Commotions appearing on Wogan to promote their first single from the then forthcoming Mainstream album, it failed to spark any interest and the single stalled at number 46 in the UK charts, which meant no Top of the Pops!

Move Away had been a top-ten success, but Culture Club‘s follow-up from From Luxury To Heartache was a relative flop. The band called it a day and wouldn’t reunite again for another 12 years.

Prefab Sprout / When Love Breaks Down

Despite the prevalence of this Prefab Sprout track on numerous ‘love’ compilations, it flopped when first released and even the 1985 reissue was just a modest hit, peaking at number 25. Still sounds fantastic though!

Depeche Mode‘s first single from their fifth studio album Black Celebration. Stripped peaked at number 15 in the UK but wasn’t issued at all in the US where Sire preferred B-side But Not Tonight.

This 1990 Beautiful South single was a surprise number one, in an era where, apparently, it was still possible to have a big hit by just writing and releasing a really good song. Dave Hemingway and Briana Corrigan handle the vocal duties with aplomb.

Deborah Harry‘s first single from her third solo album Def, Dumb & Blonde was written by the Thompson Twins’ Alannah Currie and Tom Bailey. Criminally it was the only real single success from that album (reaching number 13 in the UK charts) although French Kissin’ in the USA remains her biggest solo hit in the UK (no. 8, 1986).

Phil Collins / Plays Well With Others

4CD box set of work Collins has undertaken with other artists