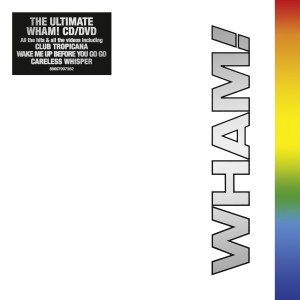 Wham! are back on 28 November with a 2-disc anniversary edition of The Final, their farewell compilation album, from 1986.

The pop duo of George Michael and Andrew Ridgely went out on a high 25 years ago, with this exceptional record that documents a short, but amazingly successful, career in pop. The Final contains six UK no.1  hits including both George Michael solo singles (Careless Whisper and A Different Corner). In addition to the standard 14-track CD, the forthcoming deluxe edition will include a DVD with 13 fully restored videos (one short of the audio selection, since the track Battlestations didn’t have a video).

Back in 1986 Wham! were unwittingly early pioneers of the Super Deluxe Edition, since The Final came out as a limited edition (25,000!) box set, which included double gold LP, a calendar, a t-shirt, and a pencil and Wham! pad. Nice!

Nothing on the album is exactly obscure, but for your enjoyment we present a lively walkthrough of the tracks on the record, with the odd bit of trivia thrown in for good measure!

Wham Rap! (Enjoy What You Do?)

Not a hit in June 1982 when first released, but was subsequently re-released in January 1983 (after Young Guns (Go For It!)) when it reached no.8 in the charts. Wham Rap! was rather political in a very simplistic way. The message was clear, working is for jerks. If you don’t enjoy what you do just stop “Cos the benefit gang are going to pay”.

It’s the 12″ version on The Final even though it’s only labelled as such on the vinyl version. In fact the 7″ version has never appeared on a Wham! CD since the 12″ version was on the first album Fantastic. An ’86 remix [Wham Rap ’86] was included as part of the 7″ double-pack and the 12″ of the last single Edge of Heaven. It’s also on the American compilation Music From The Edge of Heaven (a cut down version of The Final).

George Michael is on record as early as 1984 saying he “hates” this song. It’s the only Wham! single not on the 1997 The Best Of Wham! album, however it was present and correct on The Final back in 1986 which is not surprising since it was the biggest hit from their debut album, reaching no.2 in May 1983. The 12″ version is on the original vinyl of The Final but the CD is the standard version.

The fourth and final single from the Fantastic album, reaching no.4 in the charts, in the summer of 1983. The b-side Blue (Armed With Love) was a rare example of George Michael putting a high quality new track on the flip-side of a single. This was recognised by it’s inclusion on the cassette and LP version of The Final, although it was not on the original CD and nor does it appear on the 25th anniversary re-release. This is a shame because it has only ever been issued on CD on a rather obscure Japanese CD single of Club Tropicana. Blue (Live In China), a significantly reworked live rendition, did appear on the US Music From The Edge of Heaven.

Wake Me Up Before You Go Go

The band’s first number one and the first single from the second album, the appropriately titled Make It Big. There was no 12″ remix and the b-side was an instrumental. A classic pop song of the era.

George Michael’s first solo single was on the Wham! album Make It Big, but released in the US as Wham! featuring George Michael. A transatlantic no.1, the version on The Final is actually the full length version, which also appears on Make It Big. Jerry Wexler originally produced this track before George decided to remake it himself. The Wexler version was given an official release, briefly, on the flipside of a limited edition UK 12″ but has never been released on CD (see video below for this rarely heard version).

A third number one in a row from Make It Big, Freedom was Wham! at the peak of their powers. There was a “Long Mix” 12″ version but the on The Final it is the standard mix albeit with a unique ‘outro’ when a trumpet comes in.

A double A-side with Everything She Wants, Last Christmas topped a ludicrously successful 1984 for Wham!, and George Michael in particular. Only kept off the UK no.1 spot by the Band Aid, Do They Know It’s Christmas? charity single, it sold over a million copies and is apparently the highest selling single in UK history not to get to the number one spot. The 12″ “Pudding Mix” was for years the de facto standard version of the song, appearing on The Best of Wham! in 1997 as well as The Final. In fact it wasn’t until 2006 that the standard 7″ mix appeared on a Wham! /George Michael CD (his Twenty Five greatest hits album).

Everything She Wants (Remix)

Another remix which replaced the  standard 7″ mix on all the compilations. It’s easy to see why, since it’s far superior to the standard version which a whole extra verse at the end. George Michael has been quoted as saying that this was his favourite song from the Wham! era.

Back to the top spot, in late 1985 with this standalone single. The Extended Stimulation 12″ version was on the Vinyl and Cassette of The Final but not the CD. The US compilation Music From The Edge of Heaven actually contains a unique remix which is very similar to the Extended Stimulation mix but doesn’t have the silly voices talking about ‘magic cars’ in the middle, and instead maintains the 7″ structure at this point.  The cassette single contained an acappella version of the song and an instrumental called Do It Right was also on some formats.

Another solo George Michael single makes an appearance on a Wham! album. A no.1 (what else) in April 1986. There is a version of this track with an extended string intro but that is only on Music From The Edge of Heaven. In fact that version is not even on the UK 12″ single which just contains the standard 7″, the same as The Final. The instrumental version from the b-side is unreleased on CD.

One of the new tracks on the 7″ double-pack and the 12″ of the last single Edge of Heaven. A great song, Battlestations gave the best indication as to the direction George Michael would taking his music post-Wham!, with a fairly sparse stripped down approach and drum machines. Very Prince-like. This track could easily have been on his first solo album Faith.

Where Did Your Heart Go?

Another new song, this time a solid cover of the Was (Not Was) song. It again formed part of the final E.P. although it was released separately later in 1986.

The Edge Of Heaven

The final single predictably hit no.1 in the UK charts. It managed to keep the effervescence of earlier Wham! releases and was actually a really strong single to end on, even if it did feature a somewhat unnecessary guitar solo, that may or may not have been played by Andrew Ridgely.

So there we have it. There is nothing not to like about this compilation. Wham! were once pop royalty, along with bands like Culture Club and Frankie Goes to Hollywood. Yes, they could be a bit silly, with the shuttlecocks, “Choose Life” T-shirts, day-glo teeth and the ‘Lady’ Diana haircuts. This was the 80s don’t forget. But the songs have stood the test of time – great pop songs – and that is what makes the difference. 1997’s The Best of Wham! missed out Bad Boys and had awful updates of some tracks (Everything She Wants ’97, I’m Your Man ’96 – urgh!) so The Final remains the people’s Wham! compilation of choice.