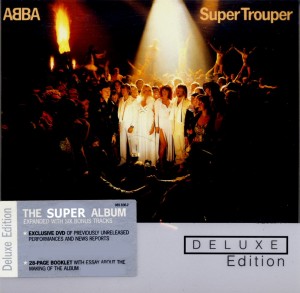 Abba continue with their ongoing 30th Anniversary Deluxe Edition campaign, with Super Trouper which is issued on 9th May 2011 as a CD+DVD set.

The album has been newly remastered (from the original master tapes) for this release and includes five bonus audio tracks. Of particular interest to fans is a stereo mix of the original, full length version of On And On And On, previously only available in mono.

The DVD looks interesting with lots of TV appearances, videos synced to remastered audio, and a new featurette called Somewhere In The Crowd There’s You – On Location With ABBA which contains archive video footage of the album cover shoot.

There is one more album left for the 30th anniversary deluxe treatment, and that is The Visitors. There are suggestions that we will see this before Christmas 2011 which would make sense since the album was originally released in November 1981.

In the meantime Abba have released a video trailer for the Super Trouper deluxe edition which you can view below.