In September, Parlophone Records will release Five Years, a 12CD or 13LP box set that will feature “all of the material officially released” by David Bowie between 1969 and 1973.

Bowie’s six studio albums of this period – David Bowie / Space Oddity*, The Man Who Sold The World*, Hunky Dory*, The Rise And Fall Of Ziggy Stardust And The Spiders From Mars, Aladdin Sane, and PinUps* – are all included, and the asterisks indicate new 2015 remasters.

There will be no bonus tracks appended to the albums, instead Five Years comes with Re:Call 1 an exclusive two disc compilation of non-album singles, single versions and B-sides. Much of this material will be familiar to collectors who picked up the Rykodisc/EMI remasters back in 1990/91 although Re:Call 1 does include a previously unreleased single edit of All The Madmen, and the original single version of Holy Holy, which was only ever released on the original 1971 Mercury single and hasn’t been available on any official release since (the version on the Ryko edition of The Man Who Sold The World is mislabelled).

Another box set exclusive will be the inclusion of Ken Scott’s 2003 stereo remix of The Rise And Fall Of Ziggy Stardust And The Spiders From Mars – previously only available on DVD with the LP/DVD format of the 40th anniversary edition of the album. This is in addition to the standard version, which presumably uses the 2012 40th Anniversary remaster. The 2003 remix version comes with an alternate cover which features an outtake from the original Heddon Street photo session. 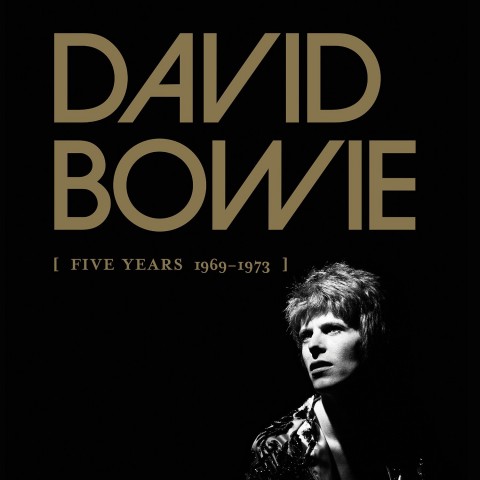 The vinyl version of Five Years has exactly the same content as the CD edition and is pressed on 180g ‘audiophile’ vinyl. Both CD and vinyl boxes come with an accompanying book (128 pages in the CD box and 84 in the vinyl set) which feature rare photos and technical notes about each album from producers Tony Visconti and Ken Scott.

Update 19:00 23/6: The label has confirmed to SDE that as far as the vinyl is concerned “everything is remastered from analogue except for a couple of tracks on Re:Call where we had no analogue source available.”

The CD box set will include “faithfully reproduced mini-vinyl versions” of the original albums and the CDs will be gold rather than the usual silver. It is not clear whether these will be high quality Japanese standard, Beatles-Mono-Box replicas, or the cheaper, smaller card sleeve CDs you get in most ‘complete album collection’ sets.

Update 19:00 23/6: SDE has been in touch with the label who have confirmed that these are high quality ‘Japanese-style’ packaging not simply card sleeves with CDs in them. To quote “a great deal of care, love and attention to detail has been taken on getting them right and looking beautiful.”

It should be noted that although this box is said to include all of the material “officially released” by David Bowie between ’69 and 1973 it doesn’t include all the material that wasn’t released at the time but subsequently ended up on reissues and box sets. For example, you won’t find the demos of Quicksand and Ziggy Stardust, unreleased songs such as London Bye Ta Ta, Bombers and Sweet Head, or the alternate versions of The Supermen and The Bewlay Brothers anywhere in this new box.

Five Years 1969-1973 is the first ‘in a series’ of Bowie boxes from Parlophone and will be released on 25 September 2015. Leave a comment and tell us what you think of it.

All tracks stereo except *mono.