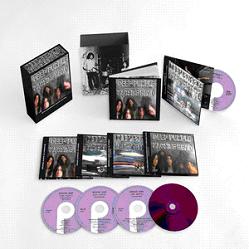 The influential album was the band’s sixth, and would top the chart in the UK. Its most famous song Smoke On The Water described the burning down of Montreux Casino in Switzerland where the band had originally planned to record the album.

This new box set features a new 2012 master of the album, the 1997 Roger Glover remix, a stereo version of the original Quad Mix, a new mix of the ‘In Concert’ 1972 live recording from the original tapes and a hi-res stereo and surround sound Quad Mix on DVD. The reissue will also be available on vinyl along with the live album.

This 4 ‘purple’ CD+DVD deluxe edition will be accompanied with fully illustrated 64 page hardback booklet, housed in a luxury box.

• CD3: ORIGINAL ALBUM QUAD SQ STEREO (2012 REMASTER) Includes; the Quad SQ as stereo, in its undecoded form, it often varies considerably from the original stereo mix of the album; ‘Maybe I’m A Leo’ and ‘Lazy’ contain alternate guitar solos to the original album mix. Plus two single edits: ‘Smoke On The Water’ (an edit created to be the fourth single in the US from Machine Head, coupled with a live version from Made In Japan. It went on to be the band’s biggest selling single ever) and ‘Lazy’ Japanese b-side.
(Engineered by Martin Birch Aquand SQ Stereo mixed at Abbey Road Studios, March 1972 and remastered at Abbey Road Studios, March 2012 by Peter Mew)

• CD4: IN CONCERT ’72 (2012 MIX) (RECORDED LIVE AT PARIS THEATRE, LONDON 9TH MARCH 1972)
Features new 2012 mix from the original 8 track tapes with the original set list in its correct order for the first time. Recorded at the BBC’s Paris Theatre, London on 9th March 1972, remixed at Abbey Road Studios, and features photographs by Barry Plummer taken at the concert itself.

**All CDs are on purple discs**

Deep Purple “In Concert ‘72” Double LP & and 7”
Double LP set on purple vinyl:
• Features a new 2012 mix from the original 8 track tapes with the original set list in its correct order for the first time.
• Recorded at the BBC’s Paris Theatre, London on 9th March 1972, it was remixed at Abbey Road Studios, and features new artwork and photographs by Barry Plummer taken at the concert itself.
7″:
• Because of the duration of the concert and issues with sound quality in relation to the length of audio on sides of LPs, the encore “Lucille” is featured on the A-side of a 33 1/3 purple vinyl 7” housed in a Purple Records house bag.
• The B-side features an exclusive and previously unreleased version of the live rarity “Maybe I’m A Leo” recorded at the soundcheck for the Paris Theatre show.