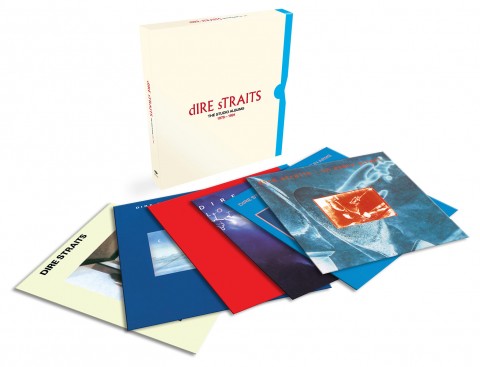 As the image above illustrates, the forthcoming Dire Straits Studio Albums 1978-1991 vinyl box set will sport classic 1984 Alchemy-era typography, with a hint of Making Movies design thrown in for good measure.

Ironically, being a studio albums collection, the live record from which the typography is taken doesn’t feature here. The 8LP box does, of course, feature all six studio albums, two of which are presented as 2LP double vinyl sets – On Every Street (from 1991) and 1985’s Brothers In Arms (unedited on vinyl for the first time).

**Update 8/11/13: Universal have confirmed with this blog that Bernie Grundman has mastered the first four titles from analogue masters, with lacquers cut by Grundman and Chris Bellman; Brothers in Arms and On Every Street mastered by Bob Ludwig from digital masters, and cut by Chris Bellman.

The Complete Studio Albums 1978-1991 is released on 25 November 2013 (for more vinyl box set releases this autumn, check out our ‘vinyl countdown‘ post).