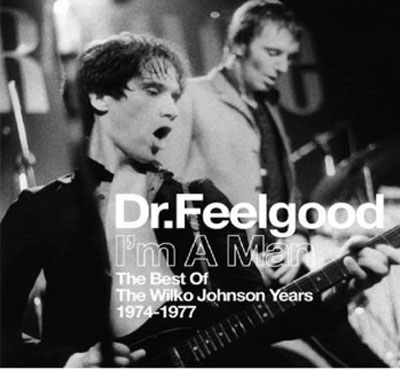 Parlophone Label Group are releasing a new Dr. Feelgood compilation next month that compiles material from the classic Mk I line-up of the Canvey Island band.

The Best Of The Wilko Johnson Years is clearly designed to make the most of guitarist and songwriter’s recently raised profile thanks to Going Back Home, his very successful album with Roger Daltrey, and a remarkable recovery from what was thought to be terminal pancreatic cancer.

This 16-track collection contains songs from the first four albums and the odd rarity such as the ‘Olympic Version’ of Everybody’s Carrying A Gun.

As a single CD round-up it looks fine, although for less money you can currently pick up the excellent 2012 All Through The City box set (repackaged edition) which is a properly comprehensive examination of the same era across three CDs and a DVD. Both sets share the same mastering, incidentally.

Dr Feelgood / “All Through The City” box repackaged and reissued

EMI are reissuing the last year’s Dr. Feelgood All Through The City 3CD+DVD box set…