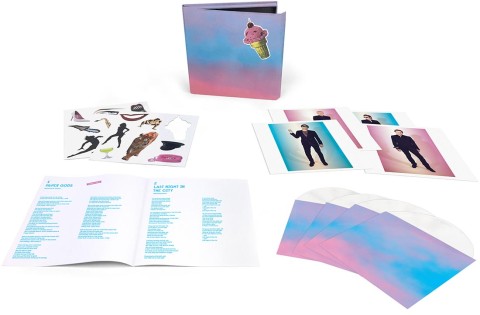 Over a year after the album proper hit the shops, Duran Duran have announced a Vinyl Factory deluxe box set version of their 14th studio album Paper Gods.

The box boasts four white vinyl records in bespoke sleeves, four art prints, 17 ‘kiss cut’ magnets (which can be stuck to the magnetised clamshell box), a 36-page booklet and a numbered certificate signed by Duran Duran and designer and LA artist Alex Israel.

As well as the 12-tracks from the album, this set includes all the five bonus tracks issue last year (including Target exclusive Cinderella Ride) and a previously unreleased track As Seen From A Distance. Additionally, one of the vinyl records includes two exclusive ‘Night Versions’ of Pressure Off. It is not known if this set comes with a download code, but since it isn’t specifically mentioned, then we have to assume not.

This set is limited to 350 copies worldwide and can be pre-ordered for a 28 November release date from Vinyl Factory’s website.

B1. Pressure Off (Feat. Janelle Monae and Nile Rodgers)
B2. Face For Today
B3. Danceophobia

Vinyl 2.
A1. What Are The Chances
A2. Sunset Garage
A3. Change The Skyline (Feat Jonas Bierre)

B1. Butterfly Girl
B2. Only In Dreams
B3. The Universe Alone

Vinyl 3.
A1. Planet Roaring
A2. Valentine Stones
A3. Northern Lights

B1. As Seen From A Distance
B2. On Evil Beach
B3. Cinderella Ride