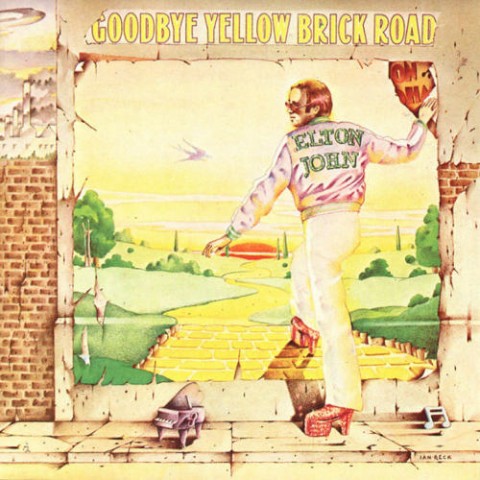 Via his website, Elton John has asked his fans to “to help us make this edition as special as possible” by sending relevant material whether it be photos, ticket stubs, merchandise, news clippings, or even audio and video (Peter Gabriel put in a similar request last year for his 2012 So reissue, but then failed to include ANY fan submitted content in the 68-page book).

Goodbye Yellow Brick Road was released in October 1973 and contains some of John’s best-loved songs including the title track, Bennie And The Jets, Saturday’s Alright For Fighting and Candle In The Wind.

The original CD release maintained the double album over two discs, but subsequent versions would tend to squeeze the 76 minutes of music onto one CD. The album has been reissued many times over the years including a Mobile Fidelity Sound Lab gold disc from 1989. Ten years ago, the 30th anniversary reissue resulted in a two-disc SACD set which featured a highly regarded surround sound mix by Greg Penny, and four bonus tracks including a previously unreleased acoustic mix of Candle In The Wind. There was also a version of this SACD set with a 50 minute ‘making of’ documentary on DVD.

We expect a super deluxe edition retailing at around £80 to be part of the 40th anniversary offering. Contents could include the album on heavyweight vinyl and CD, and a DVD with the aforementioned documentary and the surround sound mix. Further CDs could include unreleased bonus material and live performances.

What will be interesting is to see how Universal deal with the blu-ray vs DVD issue. There is a tendency from labels to conveniently ‘forget’ about cherished features on old sets when putting together new reissues (see Warner Music’s surround sound-free 25th anniversary of R.E.M.’s Green). Including a blu-ray disc with the new set will allow for a hi-res lossless stereo and surround mix to be included. If they opt only for DVD, they will not be able to include a hi-res surround mix, meaning the 30th anniversary issues will outscore the 40th in this respect. Eric Clapton’s Slowhand super deluxe edition suffered in exactly this way by only including a DVD-video disc.

What would you like to see in a 40th Anniversary Goodbye Yellow Brick Road? Leave a comment and let us know.