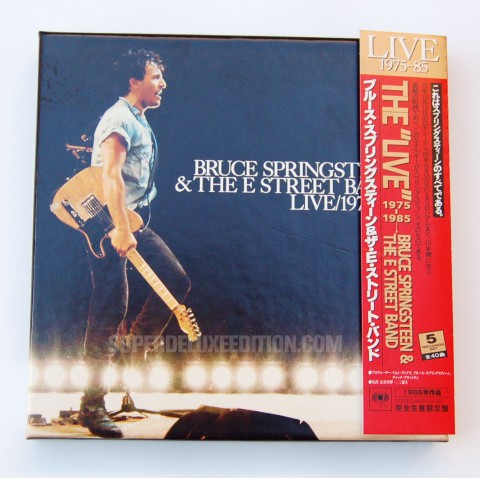 Bruce Springsteen and the E-Street Band’s 1986 release Live 1975/85 is the selection in our semi-regular feature Japanese CD of the Day.

The 40-track collection was originally released as a three-CD (and three-cassette) set in a lift-off lid box. Later issues of the CD version reverted to a ‘fatbox’ CD jewel case. Due to the format’s limited running time, the original vinyl version was a five-LP offering and it’s that edition that is replicated in detail with this Japanese mini-LP CD (MHCP-729).

The original vinyl box is shrunk down to size and the five discs echo the original running order. The CDs come in the usual (excellent) protective sleeves, but five replica paper inner sleeves also form part of this Japanese CD edition. A booklet with lyrics in English and Japanese is included, as is an oversized ‘OBI’ strip which unusually wraps around the right hand side of the package.

It’s very cute, but admittedly all about presentation. If you’re tempted by this exquisite ‘mini-me’ of the original vinyl, a quick look on Amazon reveals that this can still be picked up from around £40 (would recommend avoiding Amazon Canada where it’s available ‘from’ $476!)