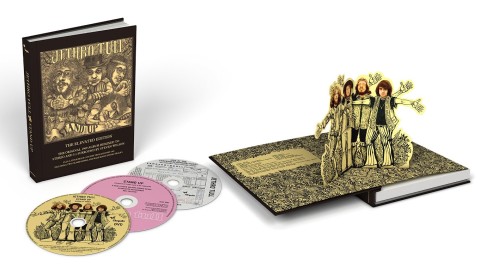 Jethro Tull‘s second album, 1969’s Stand Up will be reissued in November as a three-disc set, featuring new Steven Wilson mixes and a wealth of bonus material.

Dubbed ‘The Elevated Edition’, this new version of the album comes in the same book-style packaging as other Tull reissues of late and a very cute touch is the fact that they’ve included the ‘pop-up’ element which came with the original vinyl. (see image above).

This is a 2CD+DVD set and the first disc features the new Steven Wilson remix of the album, plus Living In The Past and Driving Song (A and B-sides of the non-album 45), some rare single mixes and a few BBC Sessions.

The second CD includes eight tracks performed live by the band at The Stockholm Konserthuset on 9 January 1969, and for good measure gives you the original single mixes of Living In The Past and Driving Song, along with a few radio spots.

The DVD contains Steven Wilson’s new stereo mix in hi-res 96/24 PCM stereo, and his newly mixed surround sound version of Stand Up (dolby digital or 5.1 DTS). The DVD also includes a 96/24 flat transfer of Stand Up from the original stereo master tapes, and flat transfers of both the stereo and mono versions of Living In The Past and Driving Song.

Finally, there is some bonus video footage on this otherwise audio-only DVD from Stockholm 1969.

Stand Up: The Elevated Edition will be released on 18 November 2016.