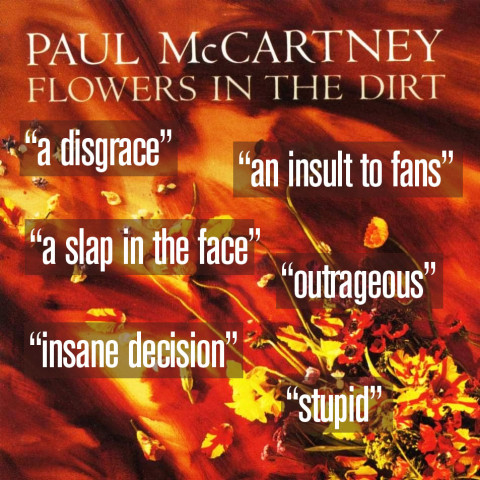 Paul McCartney fans have reacted with anger and incredulity to the news that more than a third of the audio content in the forthcoming £120, four-disc, physical deluxe edition of Paul’s album Flowers in the Dirt will only available as a digital download and is not being issued on CD or any other physical format.

The fans, many of whom have bought the previous deluxe sets, who took to SDE (and other forums), were almost unanimous in their condemnation of this strategy that delivers 16 tracks – which include many long out-of-print B-sides (such as the first Costello Collaboration, Back On My Feet), single edits and remixes – as a digital download.

In less than 24 hours, SDE has already had over 160 comments about this set. Below is just a taste of what our passionate and knowledgeable fans had to say. Can ANYONE at MPL or Capitol who reads this, still think they’ve made the right decision? They seem to have forgotten completely who the audience for these sets are. We are hoping that they are big enough to see the error and come up with a solution…

Paul: “This is just absolutely ridiculous and an insult to the fans.”

Mark: “Finally jumped the shark. Reached the point where the actual music is almost an afterthought and download only but chuck in lots of printed material. Crazy”

Marcel: “Not paying that much for a deluxe edition if I am stuck with digital files in the end. I hope this decision will be reversed.”

Simon: “Not having a physical release of the b-sides within the box is outrageous

Mark: “Do these people actually think that those who are spending premium dollars on a physical product want download only material?”

Ollie: “I can’t see any point in buying a deluxe CD box set where a significant portion of the contents aren’t actually included on CD.”

Eduardo: “His team should know by now that the buyer of these expensive boxsets is not the digital download fans but people who appreciate the physical formats.”

Ben: “People buy the big super deluxe edition because they want physical music. To fob people off with a download… is a disgrace”

Alan: “WTF! no SDE option for those period bonus tracks? For the love of all that’s holy, let it be a mistake!“

Lee: “What’s the point of releasing a deluxe edition with download-only content? Isn’t the idea to deliver the definitive physical release?

Wayne: “It just doesn’t make sense. Who makes these decisions?”

Avitom: “The whole idea of buying a physical item is that it is PHYSICAL!”

Jason: “We need to act fast on the off-chance that there’s something that can be done”

As I said, that is just a taste. You can read all the full feedback here.

While it is true that McCartney had flirted with ‘free’ downloads in the past – either as an incentive to order from his online store (when he had one) or as a tool to generate social media traffic, this is the first time a significant part of the product is being offered in this way, and it sets a dangerous precedent for future Archive Collection releases and also flies in the face of the current trend for big physical sets, such as the 27-disc Pink Floyd Early Years box, or the 36CD Bob Dylan The 1966 Live Recordings set.

The list of tracks being offered as download only is below. You can read more about the new Flowers in the Dirt reissue here.