Morrissey will release a new album, I Am Not A Dog On A Chain, in March.

His 13th studio long-player follows last year’s covers album California Son and like that record I Am Not A Dog On A Chain has been produced by Joe Chicarelli.

The producer describes the forthcoming album as “his boldest and most adventurous album yet. He has pushed the boundaries yet again – both musically and lyrically”. Chicarelli has now produced the last four Morrissey albums, beating the three album run of Steve Lillywhite in the 1990s when he worked on Vauxhall and I, Southpaw Grammar and Maladjusted.

The album can be pre-ordered now via Morrissey’s official store which has an exclusive clear vinyl and various bundles and there is also a coloured vinyl edition available from bricks-and-mortar indies (see below).

I Am Not A Dog On A Chain - CD edition 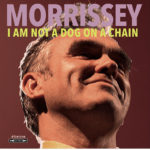 Jim Jim Falls
Love Is On Its Way Out
Bobby, Don’t You Think They Know
I Am Not A Dog On A Chain
What Kind of People Live in These Houses?
Knockabout World

Darling, I Hug A Pillow
Once I Saw the River Clean
The Truth About Ruth
The Secret of Music
My Hurling Days Are Done