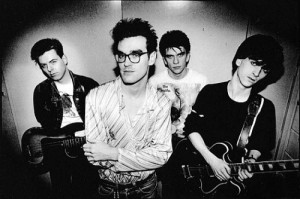 Ex-Easterhouse guitarist Ivor Perry has been in touch to give his side of the notorious Smiths session in 1987 where he stood in for Johnny Marr, as Morrissey made what, in retrospect, appears to be a half-hearted attempt to continue the band without guitarist Johnny Marr.

In our recent Viva Hate interview with Stephen Street we asked about the “Ivor Perry session” and here’s what he had to say:

Stephen Street: “There was one session with Ivor Perry. Two days were booked at a studio in Wilesden [North London] and we did one day of that. The following day, which was a Sunday, I got a phone call from Andy Rourke saying that Morrissey had gone back to Manchester and that the session was cancelled. It was quite obvious to all concerned that it wasn’t going to work with Ivor Perry. There was a song recorded on that session called Bengali In Platforms, but it was nothing like the Bengali In Platforms that subsequently ended up on Viva Hate. In fact I don’t even remember Morrissey putting the vocal down in that session – it was just a title he had knocking around”.

*It should be noted that Stephen Street did not criticise Ivor Perry when we spoke to him, and neither did he blame Perry specifically for the failure of the session.

However, Ivor Perry read the interview, got in touch and has responded with the following:

“I just want to set the record straight about this session as Stephen Street seems to have some kind of issue with me and in both books and here he puts forward the impression that I was somehow a disaster and should not have been in such talented company. some facts:

Morrissey was both a friend and a fan of Easterhouse in general and my guitar playing in particular.

Morrissey chose the tunes we recorded from a selection i provided.

I also made it clear to all concerned that i wanted nothing to do with being considered as some kind of replacement for Johnny Marr. I had great respect for the Smith’s and knew that it was not going to be feasible to step into such a role and never wanted to. I just went in with an open mind and tried to record something worthwhile under the direction of Morrissey / Street as it was obviously an opportunity to work with a major talent.

It seems Stephen had his own demo selection ready and waiting and I did not feel he was trying particularly to make it work. Obviously it was a trying time for Morrissey and I do not blame him for leaving the session but i am just setting the record straight as I had respect for myself as a guitar player / songwriter and obviously Morrissey did too.

And as a final point we recorded two tracks, one of which was Bengali and it did at least have a guide vocal as it was re-arranged on the fly to support the vocal”.

Very interesting I think all you Smiths / Morrissey fans will agree! What are your thoughts on what Ivor Perry has to say. Leave a comment and let us know.