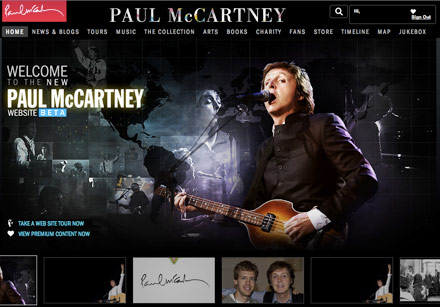 Paul McCartney has finally delivered on the long-promised collaboration with HP to provide instant access to his archive via ‘cloud’ server functionality.

His totally revamped website – driven by the technology giant – is now live in ‘beta’ form, and offers fans the opportunity to browse McCartney’s massive archive of music, photographs, and movie footage.

His entire solo audio output is available to stream, including relative rarities such as his three albums with producer Youth under pseudonym The Fireman, and the Twin Freaks remix collaboration with Freelance Hellraiser, which has not only never been released on CD, but hasn’t been available on iTunes for some time.

Registered users (no cost) can create and save McCartney playlists via a ‘jukebox’ functionality. His entire back catalogue is their to delve into. You can then share playlists with other registered fans. Premium subscribers (around £35, or equivalent) can (amongst other benefits) download a separate jukebox application to their desktop, negating the need to visit the website to access playlists (you do still need an internet connection). The lyrics to each song are available to view along with statistics such as when the track was played live and how many other fan playlists include the song.

Rude Studio is another interesting area on the new site. Named after Paul’s informal demo/rehearsal studio he built on his farm in Scotland, Rude Studio offers ‘stems’ from McCartney songs from which the user can fade up and down to create their own mixes. Currently limited to only three tracks, it’s nevertheless great fun stripping back the vocals from Band on the Run to enjoy the ‘funky chicken’ guitar from the ‘if I ever get out of here…’ section.

In addition to all this, the website offers a plethora of photo galleries (with many never-seen images) as well as news, blogs, timelines, interactive maps and an online store.

Premium subscribers receive a free MP3 album, 4 exclusive MP3s from the London Hyde Park gig of 2010, a plectrum, Lithograph, T-shirt, four button badges and the usual promise of pre-sale ticket availability and being the first to hear about new events.

Hints are already being dropped about much more audio to come on the site, and fans will be desperately hoping that Paul will dig deep into his archive and offer up some obscure unreleased gems.

Where this leaves the currently dormant Archive Collection reissue campaign remains to be seen. Since McCartney and McCartney II were reissued in June of this year, nothing further has been forthcoming, and with TWO new albums planned for 2012, these lavish reissues seemed to have dropped down Paul’s list of priorities.