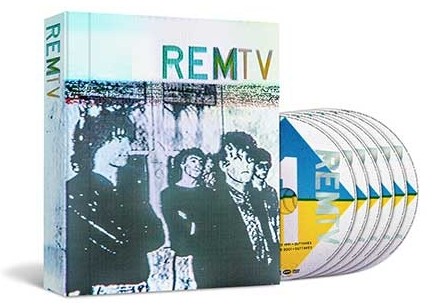 Well, well. We were all wondering why Rhino didn’t combine the two-CD version of R.E.M.‘s Unplugged release with a DVD containing videos of the performances (as they did with Eric Clapton) and the reason is simply because they were ‘saving’ that content for REMTV, a new six-disc DVD set that chronicles the ‘story’ of R.E.M. through the medium of MTV appearances over the years and decades. This new collection includes live performances, award show highlights, and television appearances, as well as a new documentary about their shared history.

The first DVD contains both of the group’s performances on MTV Unplugged (1991 and 2001) and also features the outtakes that were included on the 2014 CD and vinyl releases.

The second disc features a 1998 appearance on VH1’s Storytellers (expanded to include unaired performances of several songs and also featured are performances taken from various MTV award shows through the years, as well as the band’s 2007 induction into the Rock and Roll Hall of Fame.

The next three discs present 13 years worth rare live performances recorded from 1995 onwards – 99 songs in total preformed in different countries around the globe. Amongst all this content are two free concerts filmed for broadcast: Live In Cologne (5/12/01) and R.E.M. Live In Athens, Greece (10/5/08) which appear here in their entirety for the first time.

A new feature-length documentary, R.E.M. By MTV is included on the final DVD and finishes of this set in style.