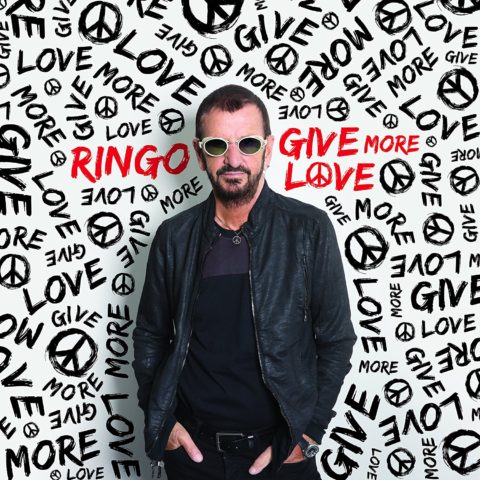 Ringo Starr‘s 19th solo album is called Give More Love and will be released in September.

The ex-Beatle recorded the record at his home studio in LA and it features contributions from the likes of Paul McCartney, Joe Walsh, Edgar Winter and Steve Lukather.

Ringo produces and has co-written songs on the album with Peter Frampton (Laughable), Richard Marx (Speed Of Sound), Glen Ballard (Electricity) and Dave Stewart (So Wrong For So Long), among others.

There is no deluxe edition, as such, although all the CD versions have four bonus tracks. You Can’t Fight Lightning, Photograph and Don’t Pass Me By are “collaborations based on performances from Starr’s 2016 Peace & Love birthday event”. What that means is they are re-recordings based on those live performances. Alberta Cross performed You Can’t Fight Lightning and Vandaveer performed Photograph and Don’t Pass Me By. Ringo loved their renditions and asked them to each record them for his new album, also adding his own vocals.

However, the final bonus track is Back Off Boogaloo (his 1972 non-album single) and this version is “based on the original recording Ringo made when he wrote the song”. That recording was produced by George Harrison. Apparently Ringo recently discovered the tape when he moved house. Interesting.

Give More Love is released on CD on 15 September 2017. The vinyl follows a week later on 22 September.

Bob Dylan will release a new triple album, aptly named Triplicate, at the end of…