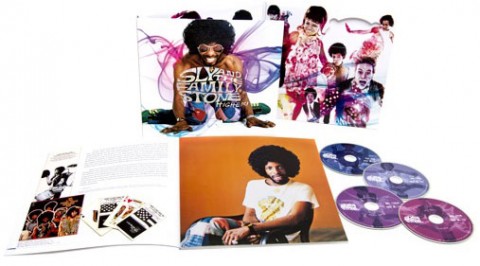 Epic/Legacy (ie Sony) are to release Higher! a four-CD deluxe box set celebrating the music of Sly & The Family Stone.

This career-spanning package will feature 17 previously unreleased tracks, alternate versions, mono singles, demos, instrumental and live performances from concerts and TV appearances. A 104-page book comes as part of the set, and the discs and book will reside in a ten-inch square deluxe slip-case.

Higher! includes 77 tracks in total and is released on 26 August 2013. See track listing below for more details.

Purchasing notes: As well as the 4CD box set, US Amazon is offering an ‘exclusive’ (and expensive) 8LP+CD package, with the bonus CD said to contain “6 more extremely rare and previously unreleased tracks”. There is also a ‘best of the box’, 16-track, single CD ‘highlights’ edition which manages to squeeze into its running order a few of the unreleased gems. The UK box set is available for pre-order at the time of writing for a decent price of £39.