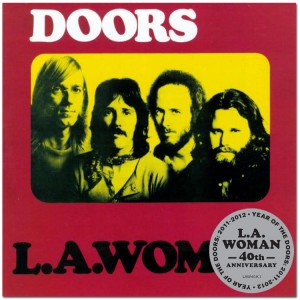 The 5-disc Super Deluxe Edition of the Doors’ L.A. Woman will no longer be released.

The title was initially announced back in September, by Doors’ Manager Jeff Jampol, and since then an initial, somewhat optimistic, release date of 24 November has come and gone and a new release date of the end of January 2012 was announced. In fact, despite the band taking hundreds of pre-orders (with payment up-front) it seems that Rhino Records has decided that it is not a commercially viable project.

To quote Jampol from the official Doors online forum: “there are concerns at their end” (Rhino) and “they want to be sure that not only is the market there, but do we have a place to distribute them?”

“It will probably be reduced to a 3-disc set (just the alternates/outtakes/chatter), and packaged so as to be affordable (i.e. NOT an expensive, all-out designed hard box).”

So as things stand, the 2-disc 40th Anniversary is still due for release on 24 January 2012, and this proposed 3-disc set will be released at an “affordable price (most likely under $50)” at some point in the first half of the year. Or “definitely in 2012” according to Jampol.

Although, as the manager points out, “the two releases together will equal the 5-disc concept”, the cancelling of the Super Deluxe Edition is likely to disappoint many Doors fans, and it’s surprising that Rhino cannot seem to make this work as a commercial proposition, given the relative popularity of the band. One suspects that this is also the view of Jampol and the Doors’ management, since they were confident enough to announce it and take pre-orders back in September.

This 3-disc set is looking likely to be a limited run – possibly around 6000 worldwide – and will probably be numbered. No track listing was ever released for the now defunct 5-disc set and we still do not know exactly what will be on the 3-disc, except that the tracks will be alternates/outtakes/chatter from the L.A. Woman sessions, all previously unreleased (nothing from the 2-disc set will be repeated).

For those fans who pre-ordered the Super Deluxe Edition, there are still many questions about what they will get and when. It’s looking like these fans will receive the 2-disc set (that they didn’t order!) and then have to wait for the 3-disc. Separately, these two should add up to much less than the $100 being asked for the Super Deluxe Edition, so surely this mean some partial refunds will be in order? There has been the suggestion of special exclusive extras to make up for the patience/loyalty of the pre-orderers, and Jampol has made a point of promising a no-quibble money back policy to anyone who wishes to cancel and get a refund.

More information when we have it.