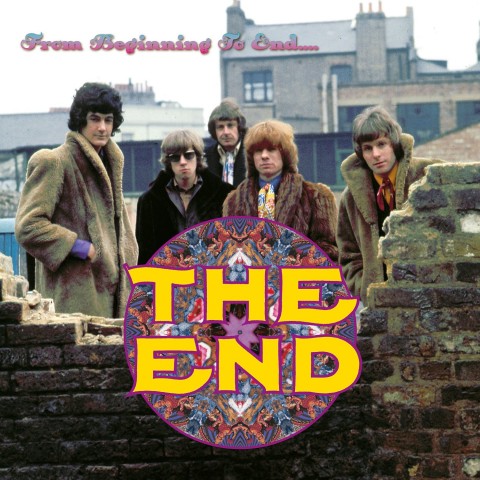 Demon Music give the Bill-Wyman-endorsed but sadly overlooked Sixties’ psychedelic group The End a reboot with a career-spanning 4CD box set, From Beginning to End…

The End was formed in 1965, by singer Colin Giffin and Dave Brown, previously members of Mike Berry and the Innocents. The Innocents had toured with the Rolling Stones in 1964, and Giffin and Brown, with their new band, joined the Stones on the road again in 1965. Bill Wyman, in particular, took a shine to their work and offered to help them in future, and went one to produce Introspection the group’s sole album for Decca (the Stones’ label). The band wrote all their own material on the album except for Shades of Orange which was co-written with Wyman and is widely considered to be psychedelic classic.

Introspection was slated for release in 1968, but ended up being shelved for a year, something that is attributed to the fallout from The ‘Stones bust-up with Allen Klein. Decca gave it little marketing support when it was finally put out in December 1969, and by that time psychedelia was rather out of fashion. Consequently, it sunk without trace, despite its undoubted qualities.

One of the unusual and charming aspects of the album is the spoken interludes by Wyman’s gardener George Kenset. As Giffin explained Kenset’s guest appearances in an interview with online magazine Salon thus: “We’d be hanging out or rehearsing at Bill’s house and George would wander in during a break and just drop these little gems of nonsense into the conversation. And it would make us laugh. And at some point in the proceedings, somebody said, ‘We should record this stuff! Because if it makes us laugh, it’ll make other people laugh.’”

This four-CD set pulls together all of The End’s recordings still in existence, the material on discs one, three and four having only previously been released on vinyl in the Nineties. The first disc covers the early days from 1964 to 1967, while disc two is the 1968 Introspection album with two bonus tracks. Disc three features outtakes (including four previously unreleased bonus tracks) from 1968-1969, while the ten-track fourth CD rounds up the band’s recordings from 1969 and 1970 before they reinvented themselves as Tucky Buzzard.

The four CDs in From Beginning to End  are packaged in a clamshell box with the suitably psychedelic band logo, and photo of the band sporting fantastically shaggy hair and shag-pile coats. The box also includes a booklet, photos and ephemera, a note by founder member Colin Giffin, and the band’s comprehensive story written by David Wells.

From Beginning to End is released on 27 November 2015.