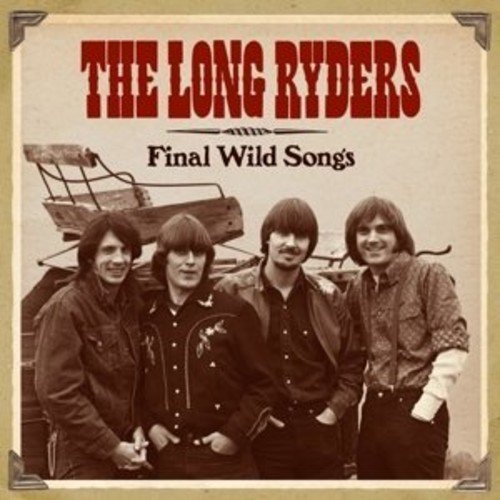 The Long Ryders were pioneers of ‘alt country’ music a good decade before the genre got a name, and Final Wild Songs, a new four-CD set issued by Cherry Red Records, is a definitive career overview…

The band’s original line-up was Sid Griffin (vocals, guitar, autoharp and bugle), Stephen McCarthy (guitar, steel guitar, mandolin and banjo), Des Brewer (bass – Brewer was later replaced by Tom Stevens) and Greg Sowders (drums and percussion). Formed in 1983 from the ashes of Los Angeles band The Unclaimed, the musicians brought a heady brew of diverse influences to the table – from country to punk rock. Consequently, the Long Ryders’ novel sound gave a respectful nod to the likes of Gram Parsons, The Clash, The Flying Burrito brothers, The Byrds and Buffalo Springfield.

For those of you less familiar with the band’s oeuvre, check out rockpillsTV’s mini-documentary here, which features a December 2014 interview with the band reliving their mid-Eighties pomp.

As discussed in the documentary, a lack of radio play in the States and the predominance of synth pop music in the UK meant that commercial success was elusive for this “organic band” whose members always followed their instincts for writing good songs rather than what would sell. That’s why, perhaps, as acerbic comedian and Long Ryders’ enthusiast Stewart Lee puts it, they are “one of rock’s great undiscovered bands, like the Flamin’ Groovies and Big Star.”

So high time to discover them, then, and this box set appears to be as good a way as any to do so. According to a post on Griffin’s Facebook page in December announcing Final Wild Songs, Griffin and Stevens spent over a year compiling and organising the songs featured in the set. With all tracks remastered by Andy Pearce (from the original tapes, where they existed), Griffin claims the recordings have never sounded so good.

The first three CDs feature the 10/5/60 EP, the three LPs the band recorded – Native Sons, State Of Our Union and Two Fisted Tales. There are also 18 rare tracks – eight of which are previously unreleased – including, on disc two, audio of the band performing Looking For Lewis And Clark on the Beeb’s Old Grey Whistle Test in 1985. The bonus tracks on that disc also include completely different mixes of Lights Of Downtown and Capturing The Flag from sessions for the State Of Our Union album. The CDs also include nine selections previously only released in the USA, and listen out for a “top-secret hidden brief track” too.

The fourth disc offers the rarest treat of all for Long Ryders disciples, showcasing as it does their March 1985 gig in Goes, The Netherlands. Long forgotten, this concert was unearthed by Stevens from his personal collection, and the track list includes live versions of songs they played on that one tour alone.

And if the box set whets your appetite to see the reformed band play live, they are touring in 2016. The schedule is currently a bit hazy so look out for precise gig dates and venues, but the European tour will begin in Spain on 23 April and end in Scandanavia (probably) on 7 May, with a London date or two (hopefully) in between. Sid Griffin will also be playing some solo gigs in the UK in June before rejoining his fellow Long Ryders in August for their first proper US tour for 28 years.

State Of Our Union: