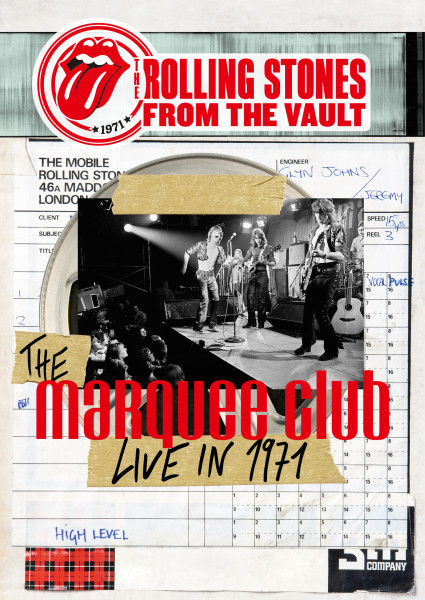 This June, Eagle Rock will release the third of their Rolling Stones From The Vault series with The Marquee Club Live in 1971 issued across four physical formats.

This ‘club performance’ was filmed (for US TV) in 1971 at the legendary London venue a month before the release of Sticky Fingers and marked the first time Brown Sugar, Dead Flowers, Bitch and I Got The Blues were showcased live. The line-up at this time was Mick Jagger, Keith Richards, Charlie Watts, Mick Taylor and Bill Wyman.

This set is being issued as standalone DVD and SD-Blu-ray both with restored footage and sound mixed Bob Clearmountain. 5.1 surround sound is included on both formats, which also come with bonus footage. You can also opt to pick up combo editions; either DVD+CD or DVD+LP.

Two tracks from this performance (Midnight Rambler and Bitch) are actually included in what amounts to a ‘teaser’ DVD within the deluxe box and super deluxe of the forthcoming Sticky Fingers reissue. If they were feeling generous the band would have included the whole thing as part of the super deluxe box.

The Rolling Stones / From the Vault: The Complete Series 1 box

If you haven’t kept up with The Rolling Stones archive ‘From the Vault’ releases,…

Review / The Rolling Stones: From The Vault Marquee Club 1971