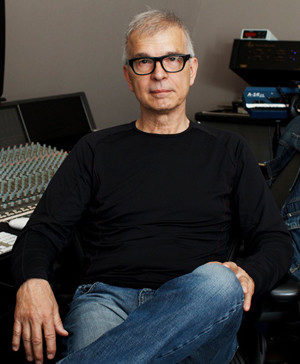 Producer Tony Visconti yesterday left a moving tribute to his friend of 48 years, David Bowie and also revealed that a 5.1 surround sound of ★ (Blackstar) in may just happen…

Two days ago, Visconti wrote on his facebook page that the premiere of David Bowie’s video for Blackstar was one of the happiest days of his life. He revealed how he’d “feverishly worked on a surround sound mix for the theater” and how Rob Stringer CEO of Sony Music said “This sounds f***ing great!”. Visconti went on to say that “When I told him it was a surround sound mix he said I should mix the whole album in surround sound. Well, that time may come eventually.”

The last David Bowie album to be issued in 5.1 was 2003’s Reality, which came out as an SACD and in the now defunct ‘DualDisc’ format.

[socialpug_tweet tweet=”Yes, @Tonuspomus, a 5.1 mix of ‘Blackstar’ would be amazing. Please help to make this happen! “]

In another note written on the first anniversary of David Bowie’s death, Visconti also wrote movingly about how he heard the terrible news while on tour with his tribute band Holy Holy (with Woody Woodmansey, the drummer from The Spiders from Mars). He said “I was sound asleep in a hotel room in Toronto when my phone lit up around 2 am with texts every second. The messages were more or less the same thing – ‘David Bowie has died’, something I had been dreading for a year.”

He added “My band, Holy Holy, hadn’t any idea David was terminally ill. I had signed an NDA a year earlier (which was unnecessary) vowing I wouldn’t reveal any details about the recording of Blackstar. The shock was obviously greater to them.”

Tony ends his note by saying  “I will try to accept that David has passed. I’ve been through every stage of grief in the past 365 days, including anger. Of course, he never left us in spirit. We are fortunate to have lived in the same time as him. We’ve seen him, we’ve heard him sing and speak, we’ve hugged him, we’ve worshipped him and we are constantly reminded of him daily. He was a legend in his lifetime and he will be a legend until the end of time. But he was my friend too. I miss him dearly.”

Read the full text of Tony’s note to fans on his facebook page.

David Bowie‘s 1977 ground-breaking album Low is the record that superdeluxeedition.com readers would most like…