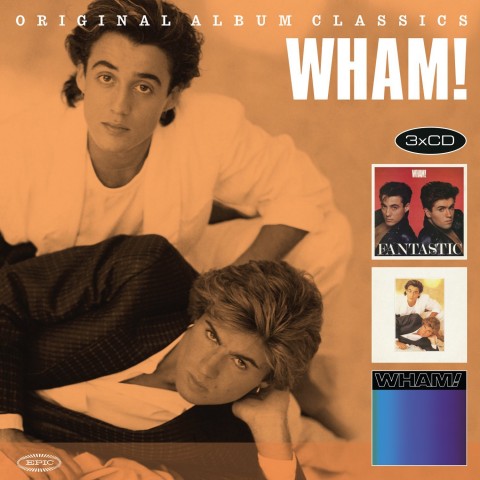 Sony are putting out a trio of Wham! releases in one tidy Original Album Classics package next month.

The budget three-CD set combines the only two ‘proper’ studio albums from George Michael and Andrew Ridgely – 1983’s Fantastic and 1984’s Make It Big – and might be mildly interesting to casual fans thanks to the inclusion of Music From The Edge of Heaven, the 1986 compilation that was issued in America (and a few other territories)  instead of The Final.

Make It Big was actually the first album in the US, so understandably issuing a greatest hits called ‘The Final’ wasn’t something that appealed to the marketeers – hence Music From The Edge Of Heaven.

Unlike The Final, the American compilation included Wham! Rap ’86 which was part of the UK Edge of Heaven EP / 12-inch. This remix runs to 6.33 and Music From The Edge Of Heaven is the only place to find it on CD. Other differences to The Final are a unique extended version of I’m Your Man (i.e. it’s different to the ‘extended simulation’ version) and the inclusion of Blue (Live in China). Different Corner is also unique. It has an extended intro which bizarrely wasn’t on the UK 12-inch but was on the instrumental B-side!

Don’t expect any remastering. These will almost certainly just use whichever is the lastest available version.

*Not on The Final.