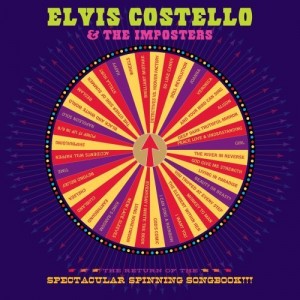 Elvis Costello‘s return to his Spinning Songbook certainly was spectacular. The box set from late last year cost in the region of £200 for – wait for it – one CD. To be fair you also got a DVD, some bonus vinyl, various items of memorabilia and a signed certificate, but even Costello himself acknowledged that it was massively overpriced.

He advised fans to wait for some of the individual components to come out on their own in spring 2012. Well, that time has come and The Return of the Spectacular Spinning Songbook!!! (the exclamation marks are his, not ours…) is now offered as a single CD or a CD-DVD combo.

The later would definitely be our recommended format. For less than £15 you get a DVD taken entirely from the 12 May performance at The Wiltern, L.A. last year, plus the standard CD with 16 tracks taken from 11 and 12 May performances at the same venue.

The Spinning Songbook – Costello’s playful vaudeville gig-turned-game show format where a big wheel literally dictates the set-list – was originally conceived and toured back in 1986 and he returned to the format in 2011. Whichever song the wheel is pointing to when it stops is what the band plays next. To add to the fun members of the audience are chosen to make a selection and then come up and sit in a ‘throne’ on stage while the band play. A musical equivalent to the chef’s table.

All this is where the DVD comes into its own. Watching these theatrics, occasionally with sometime compere Napolean Dynamite (a Costello alter-ego), really adds to the enjoyment, and what’s even better is that a 5.1 surround sound option is available as well, along with some behind-the-scenes interviews, bonus tracks and (inevitably) an option to ‘spin’ the wheel yourself and go straight to whichever song is selected.

The band are impressive and perform a set full of familiar tracks, hardly pausing for breath during the introductory three or four songs. Costello goes walkabout during a powerful and heartfelt performance of God Give Me Strength resulting in a standing ovation, and Every Day I Write The Book is another highlight, with a Costello clearly enjoying getting the wah-wah pedal out.

The DVD features a few extra tracks not on the CD including A Slow Drag With Josephine and Jimmie Standing In The Rain, both from 2010’s National Ransom, but in the end this set is mostly about pleasing the fans with the hits and having some fun.

Last year the fans were certainly not pleased when they were expected to part with a small fortune to get their hands on this material via the box set, but all should be forgiven now that these new issues are available at very affordable prices.