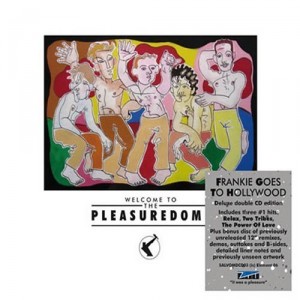 If 1984 was the most ‘eighties’ year of that decade, then Frankie Goes to Hollywood (FGTH or Frankie) were the most ‘eighties’ of bands. The year and band collided dramatically, resulting in an explosion of 12inch vinyl, remixes, cassette singles and 15 weeks at number one in the UK chart.

Resistance was futile – they would get you in the end. No teenager was without a Frankie 12inch come December 1984 and it’s hard to convey the fun, danger and excitement of FGTH in the cold light of 2011. Holly Johnson and Paul Rutherford with Peter Gill, Mark O’Toole and Brian Nash (“The Lads”) created something visceral, real and far removed from the sanitised pop that dominates the charts today.

Relax and Two Tribes have secured their place in pop history. Instantly recognisable, and instantly capable of transporting any listener a few years either side of forty back to the heady days of 1984, Top of the Pops and Our Price record shops.

While the singles and the memories are something to treasure, how well has the debut album Welcome to the Pleasuredome stood the test of time?

The album was not released until late October 1984, just over a whole year since the original release of Relax. This in part can be put down to the extraordinary lifespan of both Relax and Two Tribes in the UK charts, and record label ZTT’s decision to release multiple formats and remixes of each single. The promotional demands of the band across Europe must have been immense.

Originally released as a double vinyl LP, on cassette and CD, the album hit number one in the album charts. It did of course contain all the big hits – in yet further remixed form – as well as some well known cover songs such as Born to Run and Do You Know the Way to San Jose?

Many of the single b-sides were also on the album (albeit in remixed form). These include War ( Two Tribes 12″), Ferry Cross The Mersey (Relax 12″) and The World is My Oyster, the b-side to The Power of Love which was released only a week after the album came out.

In fact if you discount any of the short instrumental/oddities (e.g. Snatch of Fury (Stay)), cover versions and material from singles you are left with five new FGTH tracks. Not a great return from what is supposed to be a double album of new material from a band who’s last release was Two Tribes at the end of May, 1984.

Over the years we’ve had reissues of all the singles (most notably from the mid-90s) and a few half-hearted special editions of the album, but this is the first time that it has come out as a proper Deluxe Edition with the full enthusiasm and involvement of ZTT.

This 25th anniversary edition has the original vinyl tracklisting on disc one, and a bonus disc of remixes, demos and previously unreleased material on disc two.

The second CD is of course where the real interest lies and we hit the ground running, since the very first track on this bonus disc is Relax (Greatest Bits) an extended version of Relax which is unique to the long-deleted 1983 cassette single issue of the song and unreleased on CD until now.

This version of the track is superb. It effortlessly combines the best elements of the original ‘Sex Mix’, the ‘New York’ mix and the single version with longish instrumental passages in between stretching the running time to over 16 minutes.

Demos of Two Tribes, War and Welcome to the Pleasuredome make for interesting listening although whether anyone would play these more than a few times is open to debate.

B-sides One September Monday and One February Friday are very much for completists, as is an interesting extended version of The Ballad of 32.

The Power of Love is included in it’s full 12inch version, although this has been relatively easy to get hold of on various reissues over the years.

In some ways the bonus CD accurately reflects the first disc. Some amazing highlights, mixed with some quite average tracks.

To be fair the bonus CD was always going to be a challenge since all the extended versions of the singles have been previously released on CD, on releases such as Reload! Frankie: The Whole 12inches (1994) and Twelve Inches (2001). So ZTT were well aware that simply dumping all these extended versions onto the bonus disc was not going to cut the aural mustard.

One wishes more cassette single mixes had been included. Two Tribes: Keep The Peace in particular was a great cassette compilation which is still unreleased on CD.

The packaging is great with a deluxe 2cd triple-fold digipack with an excellent and informative booklet. Uncensored artwork is also a nice touch as is period photos and artists’ early sketches of finished artwork.

The truth is, FGTH were never an albums band and the rather patchy Welcome to the Pleasuredome proved that. The superlative singles gave us all we really needed, but hey, bands release albums. It’s the rules.

The bonus disc on the 25th anniversary edition has simple doubled the great tracks and doubled the filler. In that respect it is no better or worse than the original from which it’s derived.

Ian Peel, the ZTT archivist – very much involved in this release – likes to describe himself as a ‘curator’ and this reissue is certainly a welcome artifact from a golden age. If you were there at the time resistance is futile.

Win the chance to attend an xPropaganda playback event

Hear The Heart Is Strange in Dolby Atmos with Claudia & Susanne