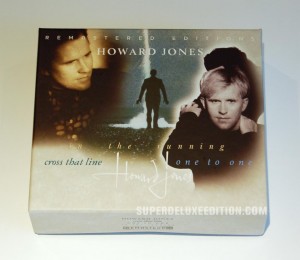 Howard Jones completes the reissue programme that covers his period at Warner Bros. next week with the release of a limited edition (2500 only) five-disc box set.

This box set (available initially from Jones’ website) covers the period 1986-1993 and includes the albums One to One, Cross That Line and In The Running. Like the previous boxes the albums are fully remastered with track listings that replicate the original CD issue – bonus tracks are found in this instance on two bonus discs.

We have managed to get our hands on this set and like the boxes for Hide and Seek/Dream Into Action and The 12″Album/Action Replay the first thing that hits you is the quality of the presentation. The box itself is a sturdy clam-shell affair with a soft matt-laminate finish, and stands about 2cm taller than the previous boxes to accommodate the additional CDs.

The artwork reproduction is first class – fonts are correct, photos sharp and the front of the box successfully blends the covers from all three studio albums. It is worth noting at this point that the packaging and music within this release is entirely under Jones’ control – he struck a licensing deal with Warner Music to reissue this old material under his own dtox label. This hands-on approach from the artist is clearly evident – time and effort has been spent tracking down original source tapes (including multi-tracks), the remastering is excellent and bonus selections (more on these later) are intelligent and appropriate.

The three albums in this box represented something of a decline in Jones’ commercial fortunes. With One To One (October 1986) the hits dried up seemingly overnight, especially in the UK. No single had previously charted outside the top 20, but the first single from the album, All I Want, peaked at number 35, while Little Bit Of Snow limped to number 70 despite the label issuing a limited edition five track cassette single (three of the four bonus tracks from it are included on the second bonus disc in this set – b-side Let It Flow is omitted).

Back in early ’87 Howard Jones may well have been scratching his head about this lack of chart success, but fans going AWOL for album number three affected some of his contemporaries in exactly the same way. Both Nik Kershaw and Paul Young changed producers for their third album on major labels, and the records bombed (Young replaced Laurie Latham with Hugh Padgham (Between Two Fires), while Kershaw self-produced after two albums with Peter Collins (Radio Musicola)). Howard Jones did exactly the same thing by saying farewell to a successful partnership with Rupert Hine, in search of a broader, more soulful sound, with Arif Mardin twiddling the knobs on One to One. It is hard to say whether anything would have been different had he stuck with Rupert Hine. One to One has its moments, but is definitely patchier than Dream Into Action from a songwriting point of view.

Cross That Line (released in April 1989) would see Jones take control of the production himself, with the notable exception of the two singles The Prisoner and Everlasting Love, where Chris Hughes, Ross Cullum and Ian Stanley took control. This team – who had previously worked with the likes of Tears for Fears – proved to be sympathetic collaborators and both songs were top 30 singles in the US, with Everlasting Love just missing out on the top 10.

This success stateside led to a fifth and final album for Warners. In The Running (1992) is something of a fans favourite with Jones bringing the piano to the fore and Ross Cullum producing. Howard Jones says of the record “The lyrics on this album relate to what had happened to me, to my friends, and what was going on in the world at the time”. Unfortunately for Jones, this selection of mature, sometimes heartfelt songs struggled to find an audience with Grunge in the US and the beginnings of Britpop in the UK dominating the airwaves.

Great packaging apart, the big incentive with these boxes are the bonus discs. This set doubles the previous offering, giving the listener two discs dubbed ‘RISK’. On the first Robbie Bronnimann has remixed The Prisoner and You Know I Love You… Don’t You? into ‘2011’ versions. Basically, remixing the ‘eighties’ out of them. You Know I Love You…Don’t You 2011 is actually an improvement to these ears, although the original The Prisoner isn’t bettered in remixed form. The new mixes are generally ‘cleaner’ sounding, but whether you prefer them or not, they haven’t messed with the original album which is sensible.

In addition to these tracks are the usual selection of extended remixes, b-sides and a couple of orchestral renditions – Hide & Seek and Hunger For The Flesh – with the later previously unreleased on CD. Jones’ final Warners single, the Donald Fagen cover I.G.Y. (International Geophysical Year), also makes an appearance.

All in all this is a must-buy release for Howard Jones fans with nine out of 22 tracks on the bonus discs either previously unreleased on new to CD. At £35 the set is reasonable value given the five-CDs, the truly excellent packaging and the limited edition nature of the set.

For the more general pop fans (in the UK in particular), the nostalgia factor doesn’t kick in quite as it did with the early reissues, mainly due to lack of UK hit singles and Jones having a lower profile over this period. To that end, the appeal is likely to be more limited, but with only 2500 sets on offer these will not be available for long. Ponder at your peril. 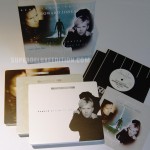 We have a copy of this five-disc Howard Jones Remasters box to giveaway to one lucky reader. If you wish to enter, then simply click here and follow the instructions!

Howard Jones / One To One, Cross That Line and In The Running box