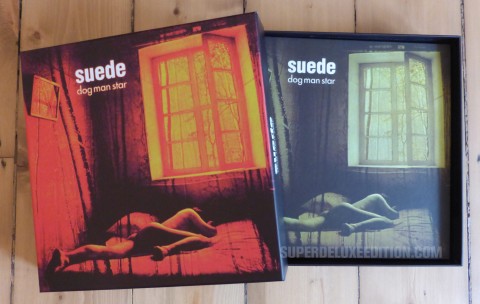 Let’s be honest, Edsel were probably regretting putting quite so much content on their 2011 deluxe reissue of Suede‘s 1994 album Dog Man Star when they sat down to discuss a possible 20th anniversary set only a few years down the line.

The previous 2CD+DVD reissue crammed in an incredible amount of content, including all the B-sides/extra tracks, unreleased demos, fan-club only bonus tracks, rare live footage on the DVD and Messrs Anderson and Butler on camera discussing the making of the record. It wasn’t perfect; the ‘long’ version of non-album single Stay Together was slightly edited, some thought the remastering a bit ‘hot’ and those fragile spines on the digi-packs were prone to creasing, but for the most part Suede fans were in dreamland and it was an amazing package.

A super deluxe edition box set was confirmed in August and the question is, having given the band’s loyal followers so much for as little as £13, what can the label offer them for £100 that will make the investment seem worthwhile?

In terms of actual audio the answer is, in truth, not very much. In fact, not only is there no new audio (i.e. previously unreleased material) on this new anniversary set, there is actually LESS than on the previous deluxe reissue. For reasons unknown, the five demos that appended the album on CD 1 of the 2011 deluxe are missing from this big box. To make it clear there are only two CDs in this new box and they replicate the CDs in the old deluxe minus the demos. One bit of good news is that Stay Together is the FULL unedited long version not the slight edit from 2011.

Let’s not be too hard on Edsel with regards to content. They can’t ‘magic’ rarities from thin air and perhaps in hindsight the 2011 deluxe was rather a premature ejaculation of bonus material. The label should have held back and waited until this anniversary year for the (£100) money shot.

That reality has meant that this new set has become about presentation, formats, cute ideas – literally repackaging familiar songs in newish surroundings. So we get the album on CD (with the bonus disc), cassette tape and hi-res Pure Audio blu-ray audio. We even find a songbook amongst the contents containing five tracks from the album in PVG (piano-vocal-guitar) and ‘tab’ format. Speaking of which, in case my Dog Man Star loving credentials are in doubt, I own the original Dog Man Star music book and unlike the one included here it has ALL the songs from the album. Have a look at the photo below:

A close examination raises the question, what colour is the Dog Man Star front cover supposed to be? That original ’94 music book has a not unappealing brownish hue whereas the new Edsel cover art has a much more greeny-yellow feel. I dug out some of the old CDs for further investigation.

The original CD booklet again has far less yellow and green in it. Look closely at the window bay – it was a white-cream colour. I personally prefer the look and feel of the original and even between the two Edsels there is a significant difference with much more yellow in the 2011 deluxe. Is this nitpicking about the cover important? Well, yes. If you are going to create some kind of ‘ultimate’ edition of an album then surely it is very important to try and recreate or reproduce the original front cover accurately. That’s not to say that what is presented here isn’t necessarily correct. Perhaps the printers got the original CD booklet ‘wrong’ and the Edsel is now correct. Either way, would the real Dog Man Star please step forward? 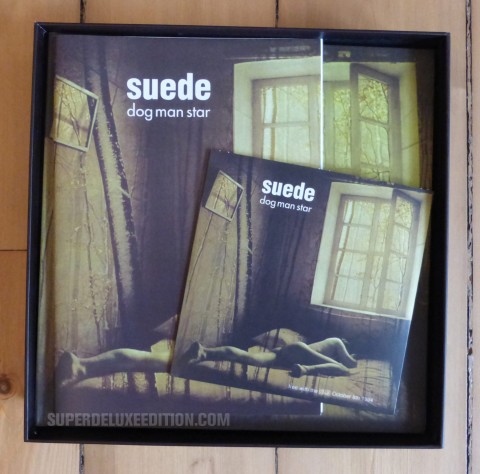 As well as the formats mentioned above, the 20th anniversary box set comes with four vinyl records (although not the actual album on LP) including a one-sided seven-inch recreation of the NME flexi-disc from 8 October 1994. There’s nothing flexible about this heavyweight pressing, and a rather bored sounding Brett talks through a few of the tracks. Not particularly enlightening it has to be said, although to be fair the music and the stories behind each song have been told many times since. I’m not sure if the original tapes were available or not, but I’d guess not since the quality of this is a little bit lacking. 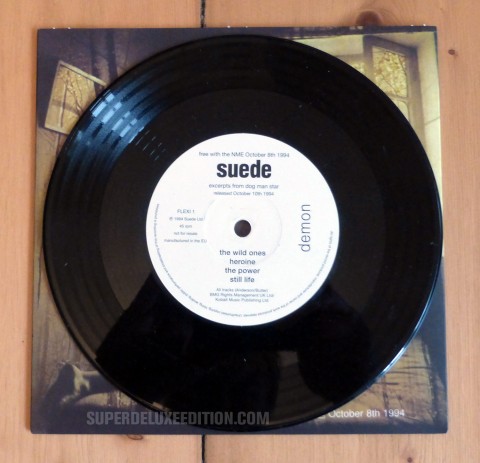 The other vinyl consists of reproductions of three twelve-inch singles.These are non-album single Stay Together (a lovely gatefold) and the first two Dog Man Star 45s We Are The Pigs and The Wild Ones (both peaked at number 18 fact fans!). These are decent reproductions although they really should have had poly-lined sleeves. New Generation isn’t included simply because there was nothing new on those singles co-penned by Bernard Butler and like the 2011 reissue, this celebration of the album is again focussed on the Butler-Anderson partnership.

This distinction is both logical and illogical. Yes, it’s neat and tidy, but that doesn’t reflect the actual history. Together was after all promoted as a double ‘A’ side with New Generation, a DOG MAN STAR single.  The twelve-inch and CD single also contained Bentswood Boys. Both of these were written by Brett Anderson and new guitarist Richard Oakes and both are missing from this set (as they were from the 2011 reissue). The fact is that the Dog Man Star era didn’t end with a clean straight line – there was a messy overlap with Oakes appearing on singles and of course performing on the Dog Man Star tour of 1994/5. In trying to tidy up the messiness of the division between Dog Man Star/Bernard Butler and Coming Up/Richard Oakes Suede and Edsel have created an imperfect and not a not really comprehensive summation of the Dog Man Star era. If you wanted to be provocative you could say they are guilty of rewriting history. 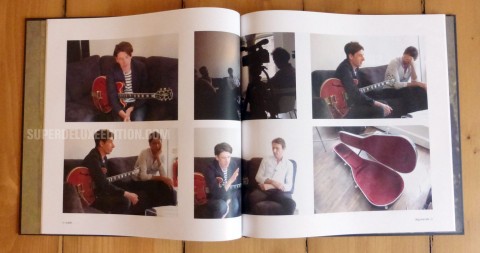 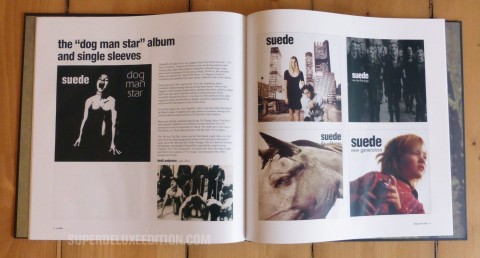 The 52-page hardback book is nicely done with lyrics to all the songs (including the bonus tracks), scans of handwritten lyric sheets, Brett’s track-by-track guide to the album, and a look at the various sleeve designs. It does lack a little depth though, if you compare it to some of the best books in similar super deluxe sets (I’m thinking about the McCartney tomes or perhaps The Who Quadrophenia / Tommy).

A DVD included with this set repeats the Tour Films and Stay Together promo video but omits all the live performances. There are some new interviews, the most interesting of which is Brett Anderson and Bernard Butler talking to Pete Paphides, going through the album track-by-track. This lasts for almost 50 minutes and like the other interview on the 2011 reissue it’s fascinating watching the pair talk about the record. Butler is far more interesting and articulate than Anderson, it has to be said, and there is definitely a perceptible level of awkwardness between the former songwriting partners. The DVD also contains a few TV appearances including two performances of Stay Together on Top of the Pops. The other videos (or Top of the Pops appearances) aren’t included for the Bernard-Butler-wasn’t-involved reasons explored above.

Other content in the 20th anniversary box includes a poster, an art print with the cover and a plastic bag (the T. Rex Slider box had one too).

The big question is how does the Pure Audio blu-ray sound? I compared Heroine with the original CD and to be frank the 1994 CD sounded muffled and 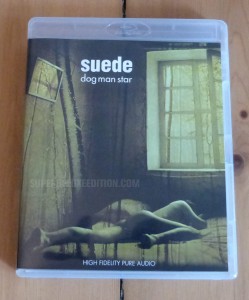 horrible in comparison although there was a lot of ‘splashy’ cymbals on the blu-ray. The Wild Ones, surprisingly, didn’t sound that different, but the more pertinent comparison between the 2011 remaster and the blu-ray revealed little audible difference to these ears. Scratch that – they sounded identical. As a fan of hi-res audio this was a rather disappointing although perhaps not too surprising since they do share the same remastering.

Surely the hi-res blu-ray format would have been best served with a proper ‘audiophile’ remaster of the source material, or even better, why not get Bernard Butler to do a ‘director’s cut’ version of the album?  A full remix that is more in line with his original aural vision. He’s on record as complaining about Ed Buller’s production. Of course a 5.1 surround sound mix would have been also most welcome.

The issue with this box is that in terms of music and video nothing included can honestly rank as ‘must have’ material, because anyone contemplating a purchase will surely already have the 2011 deluxe reissue which includes almost all the audio here (and some extra). If you don’t own that, then no doubt about it, this box comes highly recommended, but one strongly suspects that that is not the reality. On the other hand the outlay for the first reissue was relatively small, so if you ‘write off’ that purchase and fool your brain into thinking that *this* is the real reissue then the big box, lavish book, heavyweight vinyl, art print and all the rest of the content is definitely a cool way to celebrate the album.

As usual it will come down to how much of a fan of the band you are and how much enjoyment you’ll get out of the physicality of this set, but ironically the biggest Suede fans are likely to be the most disappointed.