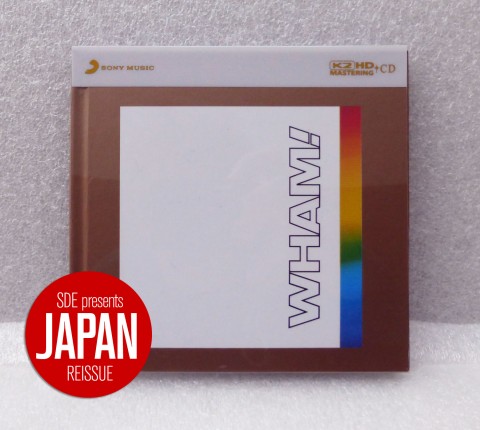 As reported a few months back, amongst some recent releases in Japan comes this K2HD remastering of Wham!’s classic 1986 compilation The Final.

Although the album was effectively a greatest hits (released in May ’86 after just two studio long-players Fantastic and Make It Big) The Final has over the years been accorded almost a de facto ‘proper album’ status thanks to the inclusion of the duo’s last three singles; Last Christmas (late ’84), I’m Your Man (September ’85) and The Edge of Heaven (June 1986). None of those tracks had been on an official Wham! studio album at that point and the addition of new tracks Battlestations (the clearest indication which direction George would move with Faith) and Was (Not Was) cover Where Did Your Heart Go? only increased the appeal.

Of course it didn’t hurt that The Final also contained (the best) half of Make It Big, seven UK number ones (and that’s not including the double ‘A’ side tracks) and a few extended remixes (even more on the cassette/double LP).

Despite the fact that The Final has been crying out for a serious expanded reissue, nearly thirty years on this has not happened. One can only assume it’s not on George Michael’s list of priorities and he’s known to be rather dismissive of some of Wham’s output with a few exceptions (Everything She Wants is a case in point).

In late 2011 Sony reissued the album on CD as a 25th anniversary edition, with a limited CD/DVD combo also available. While welcome, the track listing adhered loyally to the CD issued back in the day and the audio didn’t sound remastered,  so it really brought nothing much of interest to the table of passionate Wham! fans. 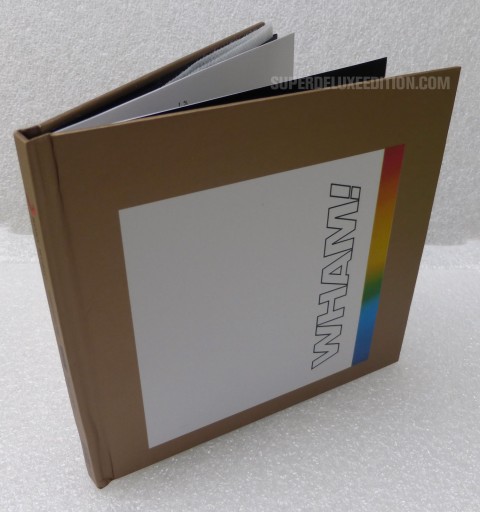 The first thing to get out of the way with regards to this new Japanese reissue, is that it too sticks to the original CD track listing, so if you were getting your hopes up for some rare alternate version or perhaps a few surprise inclusions (the studio version of Blue (Armed With Love), perhaps?) then consider that balloon of expectation popped.

It’s not all doom and gloom though, because the good news is that this Japanese K2HD edition has been properly remastered! Other Japanese formats such as Blu-spec CD2 or SHM-CD often use the existing mastering and try to convince consumers that a specific manufacturing process will lead to better sound reproduction. That can be a hard sell, but with this K2HD disc the focus really is on the mastering process rather than the system of manufacture. The system was developed by JVC and K2HD is supposed to deliver the ‘ambience of analogue sound’, ‘higher resolution’, ‘lower distortion’ and a ‘richer sound field’. A creative mastering engineer trained in how to get the best from this K2HD process works in a specially prepared “FLAIR” (Victor Studio) and extracts more detail from the master tapes.

Sounds great in theory, but does this process deliver for Wham!’s The Final? I took a listen to find out.

The comparisons carried out were in the main between the 2011 reissue and the Japanese 2014 K2HD. The 2011 issue doesn’t sound remastered at all, so there wasn’t really any need to also go back to the 1986 disc, although I did that occasionally and sometimes referenced the Music From The Edge Of Heaven CD from the USA (where The Final was never released).

Results varied. Wham Rap! (Enjoy What You Do) is very similar indeed and it isn’t that easy to detect any difference at all, but Wake Me Up Before You Go Go is a distinct (although subtle) improvement with a smoother vocal which doesn’t seem to ‘compete’ with the music as much. It’s also less trebly and does indeed seem to offer that more ‘analogue’ sound promised. In short, definitely better. 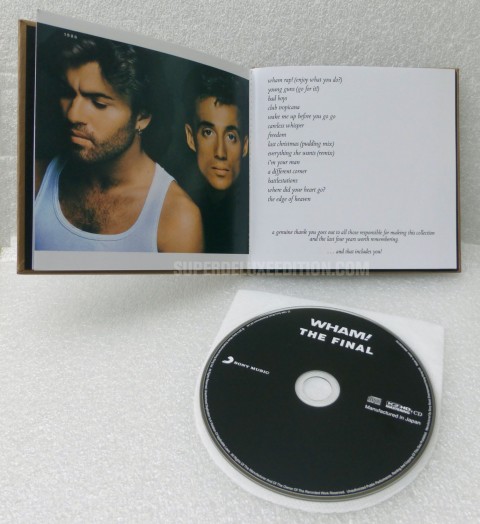 Careless Whisper also benefits from K2HD. The sax sounds very sweet indeed. While A-B testing, it was quite shocking when switching back to the 2011 disc how inferior that iconic saxophone figure sounded. In fact the whole balance is much nicer on the Japanese disc with George’s vocal really smooth again. Careless Whisper remains an all-time classic and it’s pleasing to hear it treated with some real care and attention.

On the K2HD disc Last Christmas and I’m Your Man don’t deliver a vastly different listening experience but Everything She Wants is amazing. The proverbial blanket is lifted when compared to the older disc and the music is much more involving and like Careless Whisper George’s vocals are a big improvement.

A Different Corner is another one of those where it’s not a night and day transformation, but the last three tracks (all 1986 recordings) are all very clear improvements. It really is no contest, with the Japanese disc really shining. The old mastering of Battlestations sounds like GM singing over a dull, lifeless backing track but K2HD offers much more crunch in the drums, and that squelchy rhythm guitar is much clearer in the mix. The Edge Of Heaven is another good improvement with more bite on the brass, but the award for most improved track goes to Where Did Your Heart Go? which is AMAZING. A massive difference. When you switch to the 2011 version it sounds truly awful in comparison and you wonder why this audio has been unloved for so long. It’s really flat. George’s vocals are full and thick in the Japan compared to the other disc, with sax nice and sweet, just like like with Careless Whisper. The US Edge of Heaven sounds even worse than the European 2011 version – atrocious in fact – with some presumably horrendous analogue-to-digital conversion done at the time.

I have to admit to being really surprised at this K2HD disc. When there were improvements (and that was more often than not) they were significant. What’s great is although this is still a relatively expensive Japanese import, the disc is compatible with all CD players so you don’t need to buy into hi-res SACD technology, for example, to benefit (Make It Big was actually issued on SACD in Japan but that disc isn’t in the SDE archive!). 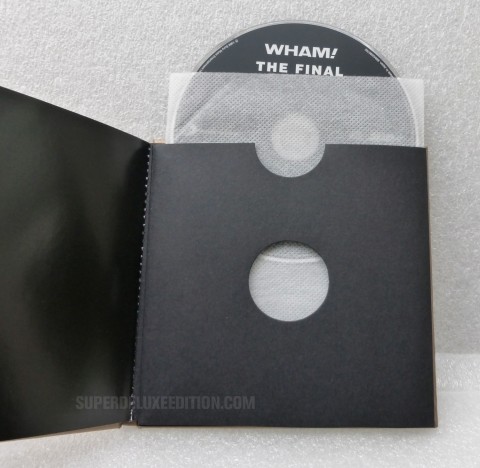 One slight disappointment is the packaging, which the Japanese are normally so good at. The gold casebound book is lovely and it slots into a transparent plastic outer slipcase not dissimilar to the kind that Universal deluxe editions used to come in, before cost-cutting measures saw them axed. The CD itself is also very well protected. So far so good. But where the side is definitely let down is the reproduction of images and photographs. There are really obvious moiré patterns on all the photos, which are visible dots or crosshatched type patterns on the image which is a result of scanning from already printed materials. Clearly no original negatives were sought out (or could be found) and it’s quite obvious and rather poor when you’re so used to massive attention to detail with Japanese packaging.

Despite this, the K2HD disc is undoubtedly the best sounding digital version of The Final out there and demonstrates that the only way you’re going to get a significant improvement in audio quality is by going back to source material and doing a careful remaster. This is something that has been achieved and we look forward to checking out further K2HD discs in the future.

The Final K2HD remaster is out now. It’s a numbered edition limited to 1000. 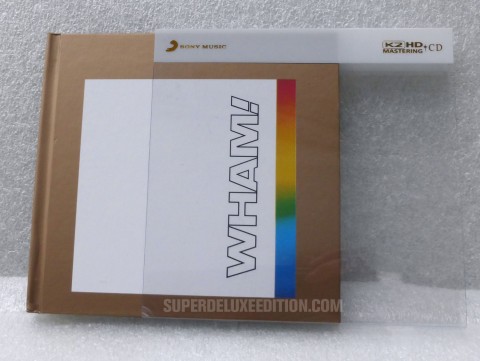 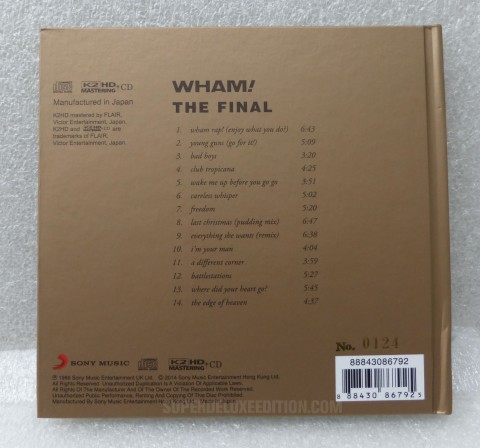 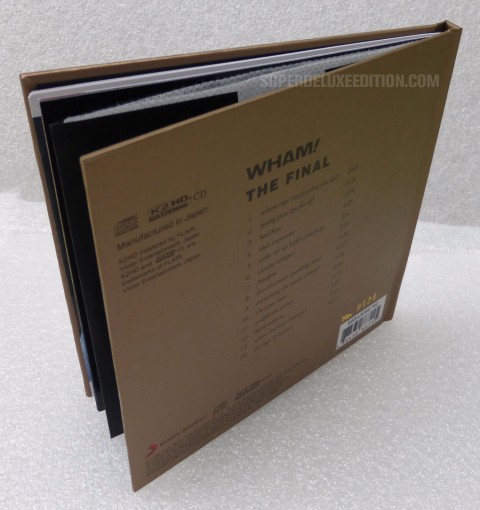