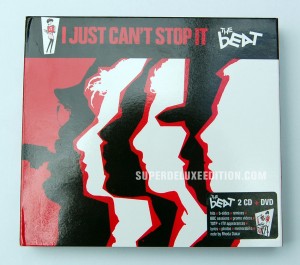 Last month Edsel Records released deluxe reissues of The Beat‘s three albums. The band were a 2 Tone ska revival outfit formed in Birmingham (England) in 1978. Known as The English Beat in the US, their sound fused ska, pop, soul, reggae and punk rock and the original line-up would last five years, before splitting in 1983.

Each of their three albums released during this period is reissued as a 2CD + DVD package – a format which Edsel are starting to ‘own’, having completed successful reissue programmes in similar fashion with Suede and The Jesus And Mary Chain.

This combination of audio and video is close to perfect when it comes to deluxe reissues in the £10-£15 range. It is great value for money, and there is normally more than enough room to soak up any B-sides, demos, remixes and live tracks on the bonus CD. Even if there is too much material for one disc, the option is there to put some bonus tracks after the album proper on disc one (third album Special Beat Service does indeed exercise this option, with seven bonus tracks on the first CD).

I Just Can’t Stop It was The Beat’s first album recorded in 1979 and would be their most successful, with three UK top ten hit singles during its chart lifetime, including Mirror In The Bathroom and non-LP single Tears Of A Clown. The later is included on the bonus disc along with the flip-side Ranking Full Stop (it was a double A-side single).

Some excellent period remixes also make an appearance including album track Twist & Crawl (extended), second single Hands Off…She’s Mine (extended) and Stand Down Margaret (Dub). Mirror In The Bathroom is notable by its absence from the period extensions, but five remixes from a 1995 reissue of that song are included. Whether anyone really needs a ‘Sure Is Pure’ remix of Mirror In The Bathroom is open to question but the inclusion of this material is understandable. If the space is available and Edsel are not displacing better archive material by its inclusion, then why not? The only really horrible remix is actually the ‘Tic Tac Toe’ mix with a now terribly dated, speeded up Drum ‘n’ Bass reworking. A small gripe is that these ‘contemporary’ remixes should probably have been placed at the end of the bonus CD, since aurally they do take you out of the era in question, only to be dragged back in again with the 1979/1980 John Peel and Mike Read BBC radio sessions that follow (these are previously unreleased, and all excellent).

The DVD has a couple of videos and Top Of The Pops appearances. They were on that show five times in total during this period, the high charting of the singles allowing them two performances apiece for Tears Of A Clown and Hands Off…She’s Mine. The highlight of the video material is a short but sweaty live performance of Hands Off…She’s Mine performed live in the Top Rank Suite venue in Birmingham. This was broadcast on British TV on 12 December 1980 in a programme called Alright Now. There is some before-show banter from the band (“I can’t tune this guitar!”) and an brave attempt at mixing live action and animation (Roger Rabbit eat your heart out).

The template is very much set with the I Just Can’t Stop It deluxe edition – Wha’ppen? and Special Beat Service have the same selection of remixes, B-sides, live tracks, videos, Top Of The Pops appearances and very interesting items unearthed from the TV archives, such as a World In Action documentary about youth unemployment in the Midlands, which includes two performances in concert from The Beat (Wha’ppen? Deluxe).

This kind of attention to detail in terms of research and licensing is what makes these (and previous) reissues from Edsel so good. Other labels should look and take note. The Demon Music Group imprint is surely the safest hands in the industry at this moment in time, when it comes to planning and executing a fan-pleasing reissue campaign.

Look out for our The Beat Competition next week!

Elvis / Prince From Another Planet

Why can’t all music releases be this good? Sony/RCA/Legacy have come up trumps with Prince…

Queen will release a concert film Hungarian Rhapsody – Live In Budapest on 5 November.…