Given the control and protection of The Beatles ‘brand’ these days by Apple Corps, it’s incredible to think in the UK in the 1970s EMI released Beatles albums on cassette and shuffled the running order of the songs for the convenience of the format.

Incredible, but true. Please Please Me, which starts memorably with Paul’s “1,2,3,4…” count-in for I Saw Here Standing There is replaced by Misery as the first track on the first Beatles album. The tape of A Hard Day’s Night, doesn’t begin with that chiming chord, but instead starts with I Should Have Known Better. Even worse, Taxman which kicks off Revolver is pushed down to track five on the cassette and that tape starts with three tracks from side two (Good Day Sunshine, And Your Bird Can Sing and Doctor Robert). The final calamity is the butchering of Abbey Road which doesn’t start with Come Together, instead, in their wisdom, EMI put two George songs together at the beginning of side one (Here Comes The Sun leads into Something).

This arbitrary approach to running orders on the tapes was eventually corrected in the 1980s, when new cassettes were issued, but it is a sobering to reflect on what can happen to great art when left in the hands of the ‘suits’ without any control from the artist.

EMI cannot release any Beatles music these days without the explicit approval of Apple, the company they formed way back in 1967, and although many get frustrated with the continued reissuing of the core catalogue and the relatively conservative approach to the archive (1995’s Anthology series not withstanding), 2009’s superb CD remastering campaign created a significant amount of goodwill from general fans and audiophiles alike.

Since that time, the engineers at Abbey Road (led by Sean Magee) have been working (on and off) to create vinyl versions of the remasters, utilising the 24-bit ‘unlimited’ digital versions created from the original analogue tapes (the CDs were created from the 16 bit digital files that were ‘limited’, which means effectively made a bit ‘louder’ to meet the expectations of majority that use that medium). Various challenges had to be overcome specific to vinyl including anticipating inner groove distortion – where the needle tracks the groove less effectively, affecting mid-to-high frequencies – and correctly reproducing the garbled message that repeats on the inner groove of Sgt. Pepper’s Hearts Club Band.

All the work has been completed and the 12 November saw the release the complete Beatles’ canon on remastered stereo vinyl – 14 records (including the US Magical Mystery Tour LP and the Past Masters collection). Everything is available separately or in a limited edition box set. If you think you’ll end up buying many or all over these reissues on vinyl it’s actually cheaper to buy the box than to get them separately.

The records have been pressed to heavy 180g vinyl, with the original packaging replicated, and starting today with Please Please Me, we will be looking at all 14 records over the next few weeks and reporting on how they sound, how they feel and how they look. The reports are all based on the EU versions of the vinyl. 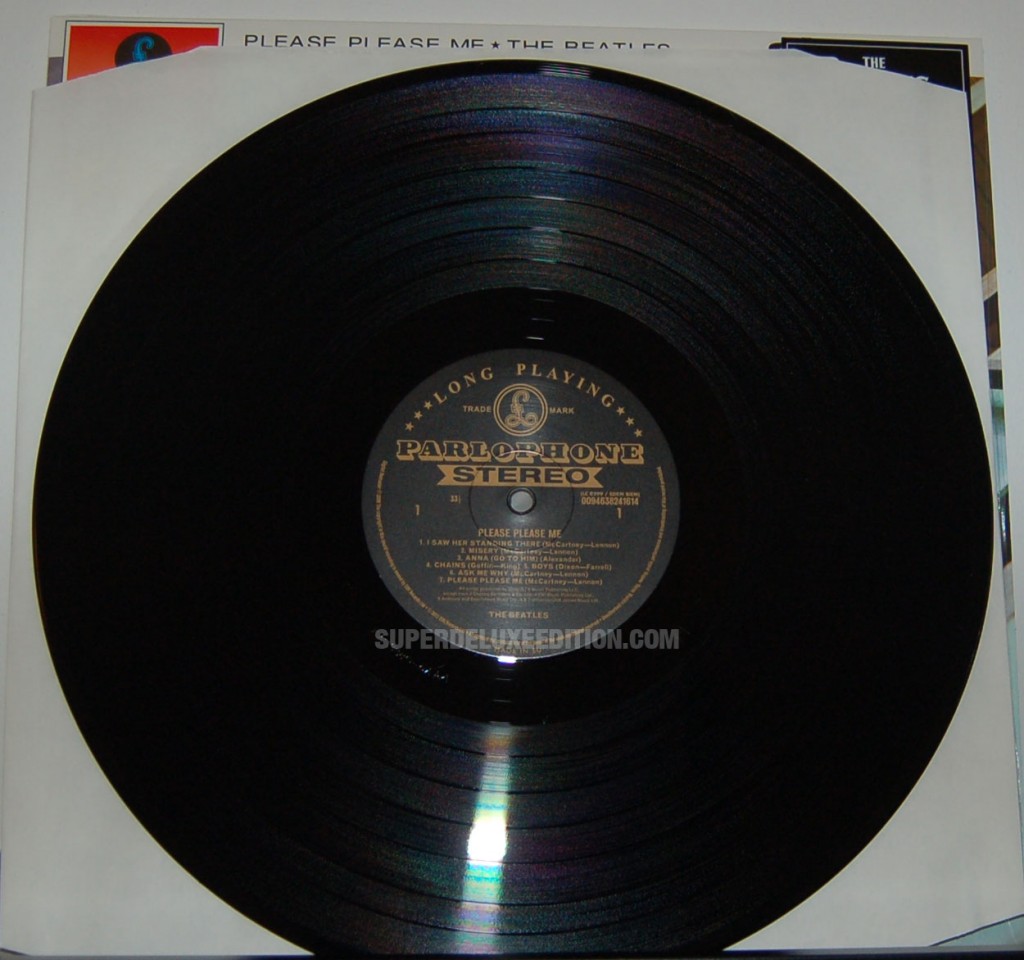 The package looks great. The familiar cover shot of the boys in Manchester Square has a little more contrast that the art on the remastered CD, and is all the better for it. The layout reproduces the original stereo vinyl with Tony Barrow’s sleeve notes and his references to ‘pop picking’ and the ‘trick duet’ that is A Taste Of Honey (i.e. Paul double tracking his vocals). The anti-static inner sleeve holds thick, deep black vinyl with the famous black and gold stereo label design, familiar to those who keep an eye on ebay auctions and watch original stereo versions of Please Please Me sell for thousands of pounds (the stereo version was very rare originally).

Our record was spotless, flat and sounded distinctly better than the stereo CD of 2009. The vocals on I Saw Her Standing There have a slightly thicker, warmer tone – Paul’s extended vowels of “Seventeeeeen” and “you known what I meeeean” are less harsh on this new vinyl. John’s voice on Misery and Anna (Go To Him) similarly has a little more depth. It’s not as if anything is really ‘wrong’ with the CD, its more a case of the benefits of well pressed vinyl are clearly apparent. Paul’s bass throughout sounds good, perceptively more prominent in places. Some tracks sound almost identical to the 2009 CD – Please Please Me being a good example.

The main issue is not really the vinyl versus CD debate, but rather stereo versus mono. Please Please Me (the album) just sounds much better in mono, something that is obvious when you come to Love Me Do and particularly P.S. I Love You on the album since because the stereo masters were ‘discarded’ back in 1962, the mono versions of these songs appear on the stereo remasters of the vinyl and CD. It’s such a relief to not hear the tiring effect of the vocals panned to the right channel for a couple of songs. The mono version is available on remastered CD via the (essential) Beatles in Mono box set of 2009, but remastered mono vinyl will not appear until late 2013.

Despite the weight of history and the creative heights the band reached with future recordings, Please Please Me is still a great album in its own right. I Saw Here Standing There is a rock-solid classic, right there as track one of the first record (and the last song John Lennon would ever play to a paying audience), There’s A Place a fine underrated early Lennon-McCartney composition, with John’s mournful harmonica punctuating the perky arrangement very effectively, and the irresistible version of Baby It’s You with it’s girl-group “sha-la-la-la-la-la-la” intro. Love Me Do, sounds as limp as ever (with Ringo on tambourine, not drums) but the B-side to that single, P.S. I Love You, is fantastic with the clippety-clop rhythm and first-beat harmonies. Of course the album famously finishes with John’s rasping vocal on Twist and Shout, left deliberately to the end of the day’s recording session (during which most of the album was completed) because George Martin knew his voice would be shot afterwards.

In the end there is just something satisfying about playing The Beatles’ Please Please Me on vinyl record. There always has been. Something to do with synchronicity. The knowledge that as you drop that needle on your record, someone somewhere back in 1963 was doing the very same thing. They were definitely not programming a CD to skip Ringo’s interpretation of Boys, listening to it on a touch-screen iPod or streaming it into their open-plan kitchen via Sonos.

Even so, until the remastered mono version is released on vinyl next year, the 2009 remastered mono CD remains the best listening experience in terms of the new remasters, and the most authentic representation of The Beatles recordings of that era. Unless you have an original 1963 mono vinyl in good condition, that is. The smell of those records adds considerably to the experience…

Order The Beatles in Stereo Vinyl box set below