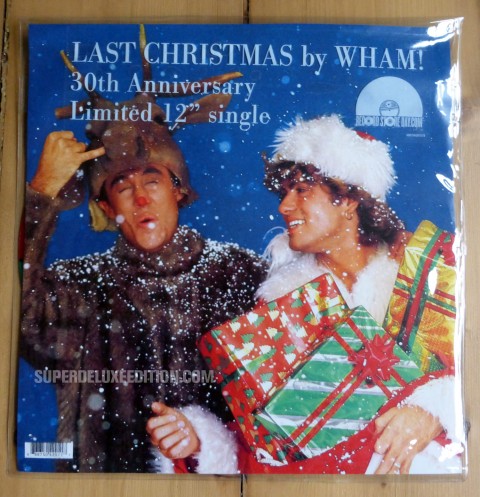 Wham!‘s Last Christmas is arguably the best Christmas single EVER. It is the fun of the early 1980s distilled into a seemingly effortless pop song that was played everywhere at the time; school discos, supermarkets, on the radio (of course) and obviously every Christmas party. It was the perfect sign-off to the best year pop music has seen (1984) and it sold well over a million copies making it apparently the biggest selling number two of all time in the UK (Band Aid’s Do They Know It’s Christmas kept if off the top spot).

Ears do not normally deceive and Last Christmas sounded like a classic on first listen. George Michael had the midas touch during those 12 months having delivered Careless Whisper in July (bookended by Wake Me Up Before You Go Go and Freedom!!) and now Last Christmas in December. Just like chart sparring partners Frankie Goes To Hollywood George Michael was oh-so-close to bagging four number one singles in 1984.

Last Christmas has been reissued as a 30th anniversary twelve-inch coloured vinyl but it’s a US-only Black Friday Record Store Day special edition. This is problematic for the UK-based SDE but thankfully those kind folks at Legacy Recordings sent one over for evaluation.

It looks fantastic. The record comes in a transparent plastic sleeve with the title, artist and Record Store Day logo on a sticker. The twelve-inch record is appropriately Christmassy, pressed on green and red translucent vinyl and the typefaces are correct and of-the-era. A 12″x 12″ insert provides all the artwork with the familiar photos of George and Andrew Ridgeley larking around, as well as lyrics. 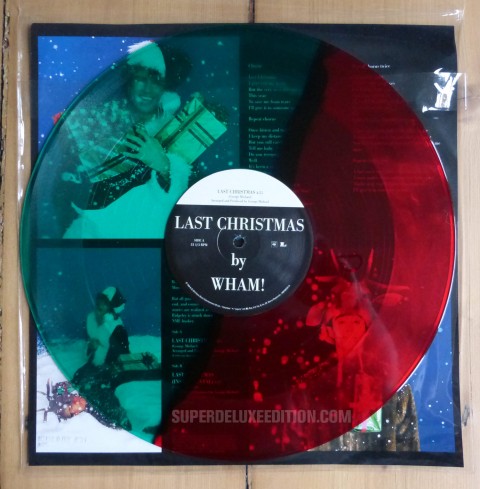 The A-side of this new anniversary twelve-inch is the standard seven-inch version of Last Christmas while the B-side is a previously unreleased instrumental version of the song. It’s actually rather surprising that the instrumental is previously unreleased because unprolific George was always shoving instrumental versions of A-sides on the flip-side of Wham! singles (this was the case for all the previous Make It Big singles – including Careless Whisper). I guess the fact that Last Christmas was a double A-side with Everything She Wants was the only thing that stopped this happening for the fourth  single in a row. Incidentally, the new instrumental does still have the backing vocals in place which is quite cool when you’re singing along.

A few quibbles…. This is pressed on 33rpm vinyl. At less than four and a half minutes per side, 45rpm would have been preferred. Also, the musical content is a little stingy. Why not put the extended Pudding Mix on here as well? Even better, how about the rare alternate Pudding Mix from the original Japanese twelve-inch single? I guess any ‘previously unreleased’ Wham! track is a minor miracle but still, it would have been nice to see something similar to the glow-in-the-dark Ghostbusters RSD release which compiled most of the remixes across two sides.

As an aside, the SDE copy was badly warped, although it still played okay. This may well be as a result of its trip across the atlantic rather than any manufacturing issues.

Does this seasonal gift indicate that George Michael’s apparently frosty relationship with both his own Wham! back catalogue and record executives is thawing? We wouldn’t bet on it, but for now let’s just conclude and say that this is a delightful item to add to your collection. Of course, you could give it to someone special…