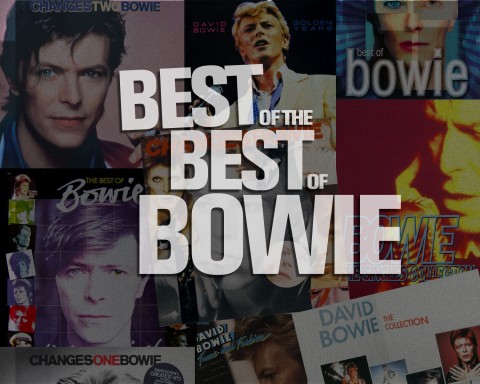 Quite a few of you greeted the announcement yesterday of Nothing has Changed, a new David Bowie three-CD hits collection, with the cry of ‘not another one!’.  And it’s true enough that The Dame has certainly had his fair share of ‘greatest hits’ sets out over the years. Below, we take a look back at 10 of them, although we’ve left plenty out – believe it or not! 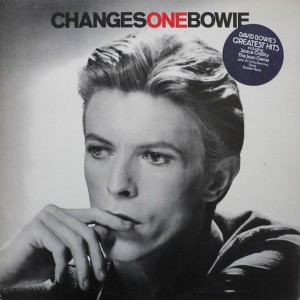 The first ‘proper’ hits collection from the RCA period, assuming you don’t count Best Deluxe, a 2LP Japan-only set from 1973. Golden Years had just been a transatlantic top ten hit and not long before that Fame had hit the top spot in the US, so with Bowie at arguably his commercial peak in America in the 1970s, this was a good time to release Changesonebowie.

Bowie Fact: No place for Life On Mars.

Bonus Bowie Fact: First appearance of John, I’m Only Dancing on an album (early pressing has the rare ‘sax version’). 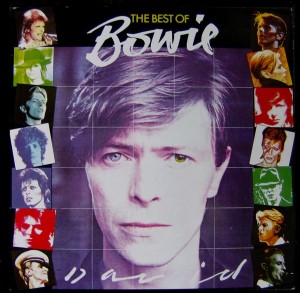 A budget compilation from K-Tel, which explains why there was no sign of what was then very recent UK mega-hits Ashes To Ashes, or Fashion. Instead, this stops at 1979’s Boys Keep Swinging from Lodger. The ‘sax version’ of John, I’m Only Dancing is back again.

Bowie Fact: Someone took the scissors to Life On Mars, creating a unique edit to help squeeze 16 tracks onto the LP.

Bonus Bowie Fact: Cover is nicked from the Fashion single. 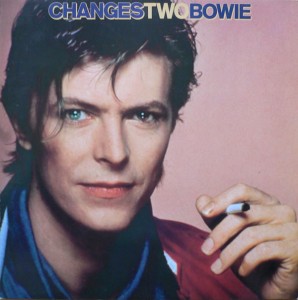 A second RCA hits collection but rather than a just including post-1976 material for a follow-up to Changesonebowie, the label went back and picked an alternative selection of early tracks to which they added later period hits, including Ashes to Ashes and Fashion.

Bowie Fact: Somebody at RCA didn’t like Life On Mars – it’s still missing, and Oh! You Pretty Things is the sole selection from Hunky Dory.

Bonus Bowie Fact: Like most of Bowie’s RCA albums, this briefly got a CD release in the mid-eighties, but was quickly deleted. Unlike the studio albums this wasn’t reissued by Rykodisc/EMI in 1990 so the CD version is rare. 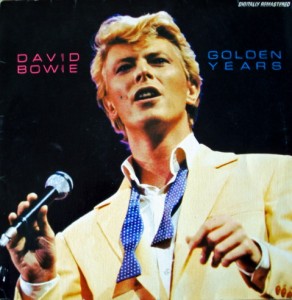 By this time Bowie had buggered off to EMI and had the enormous global hit album Let’s Dance. RCA’s final recordings were the (a-hem) not-quite-as-commercial Baal EP. The label had previously annoyed the star by issuing the old Bing Crosby duet Peace On Earth / Little Drummer Boy and the Bowie Rare compilation in late 1982, but by now all bets were off and they could effectively do what they wanted. This bizarre compilation mainly includes late seventies output, but does dip briefly into the early ’70s for the Pin-Ups Who cover, I Can’t Explain.

Bowie Fact: RCA shamelessly packaged this with a Serious Moonlight-attired Bowie on the front cover, clearly hoping to piggy-back on the Let’s Dance feel-good factor.

Bonus Bowie Fact: First and last inclusion of Joe The Lion and Red Sails on a ‘hits’ collection. 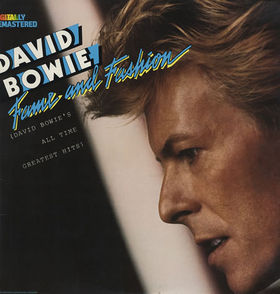 For the fourth year in a row RCA put out another David Bowie compilation. Fame and Fashion had a does-what-it-says-on-the-tin subtitle “David Bowie’s All Time Greatest Hits” and was generally more conventional than 1983’s Golden Years. This 12-track selection was – in the main – a case of one big hit per album. Changes was the pick from Hunky Dory.

Bowie Fact: A couple of years earlier RCA had also put out a similarly titled Fashions set, which was a rather nifty 10×7″ picture disc in bespoke folding wallet.

Bonus Bowie Fact: This was the last widely released RCA collection to be issued. 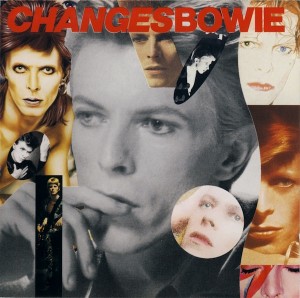 A new decade and a new deal inked for Rykodisc (in the US/Canada) and EMI (rest of the world) to reissue David Bowie’s back catalogue. The Sound + Vision box (soon to be reissued in 2014) was the connoisseur’s choice to whet the appetite for the whole Sound + Vision campaign, but general fans were offered Changesbowie, a fairly comprehensive 21-track hits collection. The public in the UK responded enthusiastically and it reached number one, while Fame 90 – a newly remixed version of David’s 1975 US number one – was a top 30 hit.

Bowie Fact: The UK cassette and 2LP edition included 21 tracks but the CD omitted the following: Starman, Life On Mars (groan) and Sound and Vision.

Bonus Bowie Fact: Fame 90 was replaced by the standard Fame on the Rykodisc Gold ‘AU20’ edition from 1996. The 14-minute “Absolutely Nothing Premeditated/Epic Mix” of the same track is still unreleased in the UK. 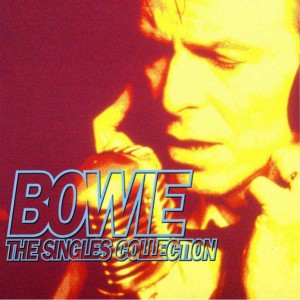 Just three years on from Changesbowie, another greatest hits emerged. In the UK this was called The Singles Collection and in the US The Singles 1969-1993.  The UK edition effectively spanned the same era as Changesbowie, albeit it included Day-In Day-Out from Never Let Me Down and the excellent Pat Metheny Group collaboration This Is Not America. However, the American version was the more interesting set and bang up to date thanks to Rykodisc having the rights to Jump They Say from 1993’s Black Tie White Noise album. Quirky selections on the US edition included the soundtrack version of Cat People with the really slow, long build-up before our man starts PUTTING OUT FIRE WITH GASOLINE!! (later re-recorded – but not improved – for Let’s Dance) and the title track from Never Let Me Down.

Bowie Fact: Early pressings of the US version came with a bonus CD single of the Bing Crosby duet Peace On Earth / Little Drummer Boy.

Bonus Bowie Fact: Space Oddity and TVC 15 are both unique edits on the American edition compared to the UK which used the album versions of both tracks. 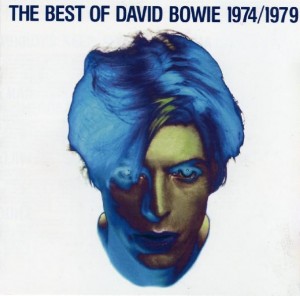 A single CD release taking the listener on a musical ‘journey’ from Diamond Dogs to Lodger. The Best Of David Bowie 1974/1979 is notable for including Bowie’s version of Springsteen’s It’s Hard To Be A Saint In The City which featured without fanfare, despite it being previously unreleased on the UK at the time (it was on the 1989 Sound + Vision box which was a US-only release).

Bowie Fact: EMI also released similar collections for the years 1969-1974 and 1980-1987. The latter included a DVD which is the only place to find the video for When The Wind Blows and Drowned Girl (from the Baal EP).

Bonus Bowie Fact: The three separate releases were brought together to form a Queen-like ‘Platinum Collection’ in 2005. The world yawned. 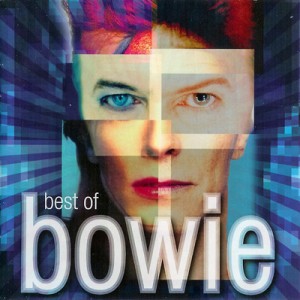 Before yesterday’s announcement this Bowie ‘best of’ had the widest span at 33 years, starting (inevitably) with 1969’s Space Oddity and ending with Slow Burn from what was at the time the lastest album, 2002’s Heathen.

Bowie Fact: This was released in 21 territories and track listings in each area were different depending on which songs were most popular. 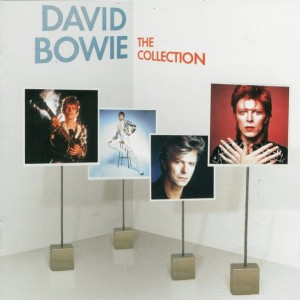 An excellent and thoughtful budget release that forgets about ‘hits’ and has a one-track-per-studio-album rule for the 1969-1980 era (not including Pin-Ups). Nothing overfamiliar here, as it kicks off with Unwashed And Somewhat Slightly Dazed (from Space Oddity) moves through tracks like Andy Warhol (from Hunky Dory) and ends with Teenage Wildlife (from Scary Monsters).

Bowie Fact: Sweet Thing from Diamond Dogs is included by without the Candidate and Sweet Thing (reprise) elements. Frankly, this doesn’t work.

If you’ve got all of the above you will be wanting the new compilation “Nothing Has Been Changed” to keep your collection up-to-date! It’s being released on 17 November along with the brand new single “Sue (or In A Season of Crime)”

3CD Deluxe Edition / Nothing Has Been Changed

2LP Double vinyl / Nothing Has Been Changed

2CD Edition / Nothing Has Been Changed