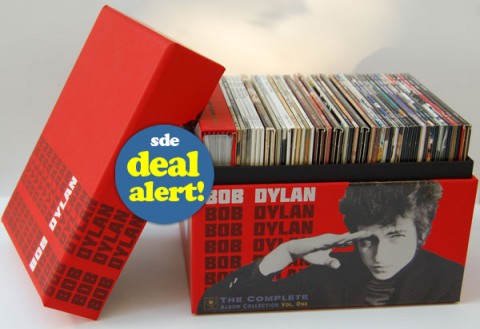 Lowest price ever on Amazon UK for the highly-rated Bob Dylan Complete Album Collection, Vol. One box set, with it now dipping under £100.

The 47CD (!) set features ‘the entire official discography’, so all 35 studio albums are present and correct, including 1973′s Dylan, as well as six live albums, and a special two-CD compilation, Side Tracks, that brings together previously released non-album singles, tracks from compilations, and songs from films.

It’s a beautiful presentation, with a superb ‘soft feel’ lift-off lid box set and a stylish 272-page hardback book as part of the offering. A few gatefolds are amongst the card-sleeved albums including Blonde On Blonde, Before The Flood, and Side Tracks.

More photos can be found here. At the time of writing this set is a bargain at £95.