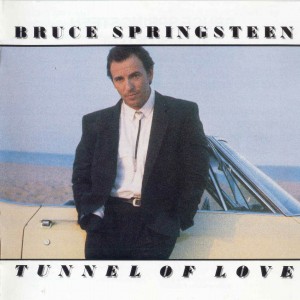 After the stadium bombast and Arthur Baker remixes of Born In The USA, Bruce Springsteen released a very different record, three years later in October 1987.

His marriage to Julianne Phillips (they wed in 1985) was falling apart – denied at the time of release – and the songs on new album Tunnel Of Love would reflect this with meditations on love, self-doubt and disappointment.

The difficulty in loving someone and maintaining a relationship was clear to see in some great lyrics from ‘The Boss’ on songs like Tunnel Of Love:

“The lights go out and it’s just the three of us
You, me and all that stuff we’re so scared of”

The album had quite a low-key feel to it, with plenty of acoustic guitars and harmonica and Springsteen also making subtle use of drum machines and keyboards while recording, largely alone, in his home studio. Some members of the E-Street Band made occasional appearances on the record (notably Max Weinberg on drums and percussion), but this is not regarded as a ‘band’ album.

Despite the intimate nature of the material, and the songs of fractured relationships and cautious men, the singles released from the album performed well, with Tunnel Of Love and Brilliant Disguise (with it’s superb one-shot video) both hitting the Billboard Hot 100 top ten.

Although not released in the US, Tougher Then The Rest and Spare Parts were released in the UK (and other territories) and both were top 40 hits, rather surprisingly bettering the no. 45 peak of Tunnel Of Love in Britain.

The various single formats contained some at-the-time unreleased outtakes, including Roulette from The River (1979) and Lucky Man and Two For The Road from the Tunnel Of Love sessions. All would reappear on 1998’s Tracks box set.

Sadly, the rumours proved correct and Phillips and Springsteen’s split was announced in 1988 during the tour. Bruce then became romantically involved with backing singer Patti Scialfa, and their relationship endures to this day (they married in 1991).

A 25th Anniversary Edition of Tunnel Of Love would most likely be a 2CD+DVD affair and look something like this: