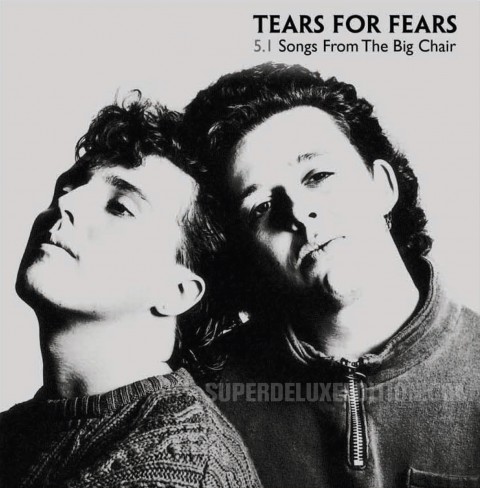 SDE Editor Paul Sinclair worked on the forthcoming reissue of Tears For Fears’ Songs From The Big Chair. In this feature he exclusively lifts the lid of some of the behind-the-scenes work that went into remastering the album and talks to Steven Wilson about the remixing process…

The newly announced Tears For Fears reissue of Songs From The Big Chair will include a 2014 Stereo Mix as well as a new 5.1 surround sound remix. Although the 5.1 mix has got everyone very excited (understandably), the stereo remix is worth talking about because there are some aspects to this remix that may not be at first apparent.

The main thing to consider is that the last four tracks on the album (I Believe, Broken, Head Over Heels and Listen) all cross-fade into each other. Back in 1985 in the pre-digital editing era, two analogue machines would have played back the stereo masters while dubbing onto a third machine to create the cross-fade. What that means is that every issue of Songs From The Big Chair up until this point has contained ‘second generation’ versions of the tracks in question.

Steven Wilson, who was responsible for both of the 2014 remixes, describes the process: “Once the tapes were re-synchronised and transferred, I worked to match the original stereo mixes, recreating instrument balances, stereo positioning, equalisation, compression, reverbs, delays, etc. These remixes were regularly run past Roland for feedback, and went through several versions until we were happy that they were as faithful to the original album mixes as possible. Only at this point were the mixes expanded from stereo to 5.1.”

So on the 2014 Stereo remix I Believe, Head Over Heels and Listen are two generations better than what was used to master the original album (back one step to the stereo analogue masters and then another step back to the multi tracks). Everything else (i.e. the tracks not crossfaded) are one generation better (stereo masters to multi-tracks). Broken is a special case because despite an extensive search, the original multi-track tapes could not be found. So for the 2014 stereo mix, the original stereo masters (prior to being copied to the second-generation compiled album master) were used, making that track also a generation better than what was used on the original.

Of course the lack of multi-track tapes for Broken had an impact on the 5.1 mix. Steven Wilson explains the workaround: “The original stereo masters were processed through Penteo stereo to surround up-mixer software in order to create pseudo surround versions.  These were then inserted into the album sequence to maintain the 5.1 playback flow.”

Despite that little forced compromise with the 5.1 mix, every track on Songs From The Big Chair is at least one generation ‘fresher’ on the surround version and the 2014 stereo mix, which is an exciting prospect for fans. (Both these mixes are on DVD and blu-ray – the version on CD 1 (in the box and deluxe edition) remains a remastered version using the original analogue tapes).

It should be pointed out that Steven Wilson doesn’t consider the new mix to necessarily ‘better’ than the original though: “It’s a matter of taste whether it sounds better than the original mix,” he says. “More clarity in places perhaps, but the original mix is great and definitive, so I would say the new mix just sounds different, not better. However, one thing that does differ very slightly to the original is that I backed off some of the extreme use of reverb on some mix elements.  The trend in the mid 80’s was definitely to have everything bathed in massive arena-sized reverbs, and I certainly have not changed that approach or the overall sound world of the album, which is supposed to sound huge and epic after all.  It’s more a subtle tweak that just gives the impression of the instruments and vocals being slightly more present or “up front” in places.”

The 5.1 mix can be found on the forthcoming super deluxe edition box of Songs From The Big Chair as well as the standalone blu-ray. Both those formats also contain the 2014 Stereo Mix which is additionally exclusively available via Universal’s online store as a limited edition vinyl pressing.

Another issue that I was aware of, before the project even began, was the fact that the stereo image (the left and right channels) were supposedly reversed on the 1999 and 2005 reissues of Songs From The Big Chair when compared to the original UK vinyl. These have long considered to be ‘wrong’ by the uber-fans that concern themselves with the finer details. The 1998 Mobile Fidelity Sound Labs audiophile CD pressing had a reputation for being the only reissue to get the channels ‘right’ by maintaining the stereo image as it was on the original LP. An easy way to tell the difference is that on the original record the percussion (i.e. metallic chimes) at the beginning of Shout go from right to left. On subsequent Universal reissues they go from left to right. Anyway, I mentioned this to Andy Walter who was remastering the CD element of the Songs From The Big Chair reissue and he advised that the master tapes have a hand written note on them pointing out that the channels are reversed on the tape and therefore should be reversed again to get them back to how they should be. Trouble was, the tape played the Shout percussion right to left, which at the time we thought was CORRECT, therefore if we followed the instruction to reverse them, surely they’d be ‘wrong’? Arghh!!!

I asked Steven Wilson what he thought and his opinion was that most mixers would have mixed the metal chimes from left to right so he was dubious about the fact that right to left was correct. Thankfully, as he was liaising regularly with Roland [Orzabal] at that point, discussing the new stereo and 5.1 remix, we had an easy way to check with an authority. Roland told us that since Jerry Marotta is right handed, the toms on The Working Hour would have been mixed “low tom on the left and high tom on the right”. Lo and behold the original LP is the reverse of this. If there was any further doubt Steven Wilson also checked with the original producer Chris Hughes who confirmed categorically that the metal chimes should go from left to right. That information effectively proved that the original UK vinyl pressing is incorrect – the stereo image is the wrong way round which is why the master tape has the 1998 Jon Astley note (see above) stating that it should be reversed. That instruction was either not followed for the MFSL CD or as is more likely they used different tape sources (Head Over Heels on the MFSL runs slightly longer than the standard album version which means that cannot have used the same tapes ).

So the mystery of the stereo image has been solved once and for all. The 2014 remaster and the 2014 stereo mix correctly reverse the channels when compared to the original vinyl release which – incredibly – is incorrect. The MFSL is also incorrect so its reputation for being the only ‘correct’ version now lies in tatters!

Songs From The Big Chair is reissued on 10 November 2014.