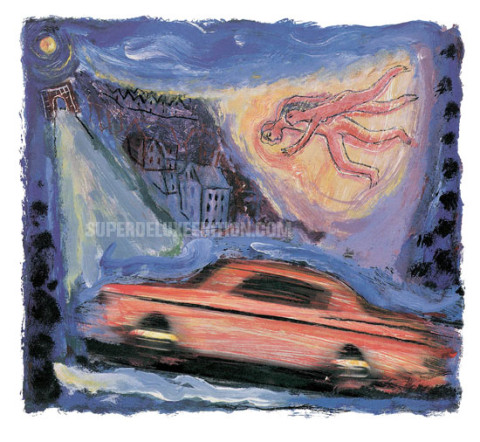 In an exclusive extract from the sleeve notes of the 30th anniversary deluxe edition of It’s Immaterial‘s Life’s Hard And Then You Die, the band, producer and record company A&R man tell the story in their own words of how the track was recorded and how despite its success, it should have performed much better than it did in the UK charts…

JOHN CAMPBELL: It was Siren’s choice to try to team us up with a member of Talking Heads to produce Driving Away From Home, wasn’t it?

JARVIS WHITEHEAD: Yes. Ross [Stapleton] had David Byrne in mind but he was busy working with Eno.

JOHN: So their management suggested Jerry Harrison and the record label sent us out to Milwaukee to record Driving Away From Home. I remember landing in Chicago and one of those stretch limousines taking us from Chicago to Milwaukee, through this snowstorm, so it was a fun trip. When we arrived, there was a rhythm section that Jerry had hired; bass player, drummer. Jarvis usually played the bass, so immediately it was like “who is going to play the bass on this?” There wasn’t any kind of travelling, country and western type of songs here in Britain, so we wanted to make something like that. But we didn’t want to make a pastiche of a country and western track; we wanted to make something very British. But I think Jerry Harrison had the idea that he would get in good Nashville musicians, or something, and we would make a country and western track out of it, except with a British, or English lyric over the top. We started recording this rhythm section. It wasn’t particularly working for Jarvis and I.

JARVIS: I remember it being a little awkward for us. We were in a foreign place; a bit naïve and not quite sure what to do. Jerry seemed to have in mind a more authentic sounding version of the song. We envisaged a more modern take on the classic American road song, but with a British narrative. We diplomatically got rid of each musician until we were left with the drummer. Eventually we got the dreamy and syncopated keyboard parts from Jerry that we had hoped for.

JOHN: He recognised – as these musicians were putting down their backing track – that Jarvis and I were beginning to look a bit grumpy about things. We were trying our best to engage and look positive, but we were not really that happy about it. And we had already had conversations about how when we got back to Britain, we could go into a studio and do our own version of it. At six o’clock in the evening, Jerry Harrison would leave the studio and go home, and this guy offered to work with us on a separate multi-track.

JARVIS: Yes, we had two multi-tracks, one for when Jerry came in and one for when we were working on our own, when he wasn’t there!

JOHN: Jerry did some great stuff, what he was known to be good at and creative with, like the keyboards, some really, really good stuff; we kept all those parts. We really just didn’t want this American country and western rhythm section. So we took the multi-tracks back to the UK with us to mix and the first mixes that we offered were really based on our multi-track. I remember Jerry Harrison got a bit disgruntled about that. We didn’t mean to put his nose out of joint; it is just what we wanted. We went to the studio with Dave Bascombe and mixed Driving Away From Home. The American recording was definitely before the Christmas of 1985, it was about the second week in December. So I think we must have gone in early in ’86 with Dave – January or February.

ROSS STAPLETON: I had been away in Australia for Christmas ’84 and only heard the result when I got back to London in January. I was shocked. Given this was so early in our relationship after signing them, being told we needed to salvage it with a new producer didn’t exactly delight them, and provided some additional pressure to get it right. I sought out Chris Hughes, whose work I loved on Tears for Fears’ Songs From the Big Chair, but I was told he was unavailable. A mate who also managed several producers, knowing my situation, suggested Dave Bascombe who had engineered Big Chair. So we went into the studio with Dave and straight away it was a magic fit which green lit him doing the album.

DAVE BASCOMBE: When I first heard it, I remember I was doing a Tears For Fears session, and we listened to it, and we all thought it was great, except the drums were stupid, they just went “boof-baff, boof-baff, boofbaff…” like some sort of comedy record. It’s interesting about perspectives, because to us it sounded like a Benny Hill record or something. The basic premise was wrong, even though a lot of Jerry’s overdubs were brilliant. So that’s why they fell out. John and Jarvis had done the song originally with a Roland 808 – the same beat, but a nice gentle beat. I ended up replacing Jerry’s snare with an 808 snare and lightened it up a bit, but we kept a lot of the music. We got a girl singer in, Merran Laginestra, who was a solo act on Siren. In the end, Jerry wanted his name taken off it.

JARVIS: We didn’t go out that much in Milwaukee, but one night we went for a drink downtown with Jerry. It was quite a big bar, you know, classic American, darkly lit, with a small stage. A blues band was playing. One of them shouted out, “oh, we heard Jim’s in town”, and Jim Lieber got on stage, didn’t he? He started playing the harmonica and straight away it was obvious that he was a virtuoso. I don’t know whether Jerry knew he was going to perform that night but, it was just what we needed…

JOHN: So he came down the following morning and quickly laid down a couple of tracks and then nipped to the airport, because he was off back to Nashville. But he was fantastic what he did.

JARVIS: He was great. Yes, it was just one of those moments, and it was so good we credited him in the title of the song, didn’t we? “Jim’s tune.” I felt Driving Away From Home had something about it. Especially the way it turned out after we’d worked on it with Dave in London. It had finally ended up as we had originally conceived it – a British on-the-road song with, a strong forward dynamic with interesting events and textures. John’s narration was at the heart of it though; it was a really nice idea. It was a surprise when it started getting daytime plays on the radio – we thought it may get on the evening shows. But then for two weeks it was a massive turntable hit. It got more plays than George Michael, didn’t it?

JARVIS: It seems like it could have made it to a much higher chart position. But what the hell, it doesn’t matter now.

JOHN: I know that during one of the marketing meetings, it was decided to pull out the team from working this single and go and market one of the other acts, because they thought it had legs, it will work for itself. And of course it stalled.

ROSS: Virgin blew it after it got to number 18, not only because they stopped working it… they committed the most cardinal sin in the record business, they ran out of stock; although I only found this out from the head of WEA who phoned me himself to tell me what his own sales team has reported back to him.

Interviews conducted by Paul Sinclair. Read more from John, Jarvis, Dave and Ross as they discuss each track on the album in the booklet within the two-CD massively expanded Life’s Hard And Then You Die.

A limited quantity of official Driving Away From Home T-shirts SIGNED by the band (plus T-shirt & CD bundles) are available at the new SDE store, www.ShopSuperDeluxe.com 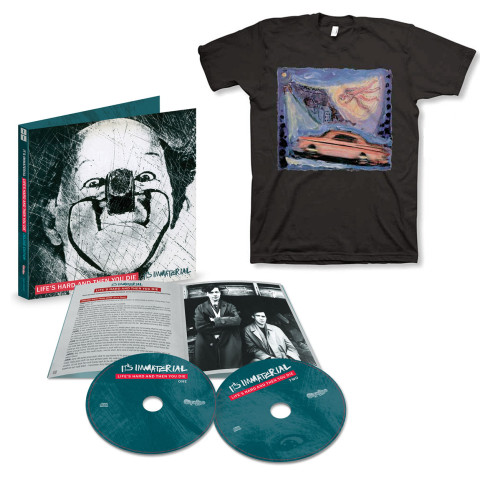 SDE Exclusive: Tears For Fears on the making of Sowing The Seeds of Love