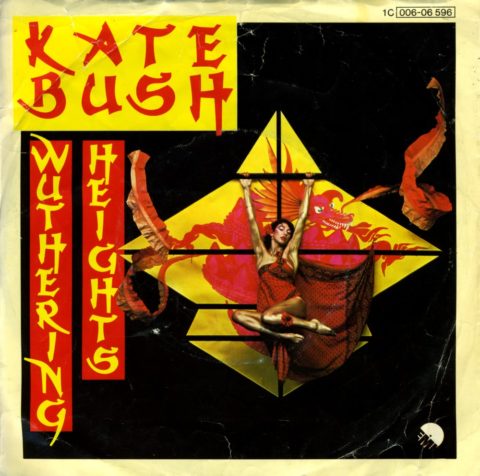 Wuthering Heights is arguably one of the most iconic British singles of the 1970s. It was released by EMI 40 years ago today, as the first 45 from The Kick Inside and introduced the world to the singular talents of Kate Bush.

Unknown to the public at that time, was the fact that Kate had been working towards her first album for over two years and had been ‘discovered’ by David Gilmour. He recalled that she was “a sister of a friend of mine’s friend” and the Pink Floyd guitarist met her in 1975 when she was just fifteen. She’d already amassed around 50 songs and Gilmour picked three from her demos and set up a session to record masters (not more demos) with Andrew Powell, an arranger/producer that he knew. Two of those songs ended up unchanged on her first album, A Kick Inside.

So Kate was signed to EMI while still at school. The regularly accepted story of EMI giving Kate a chance develop as a artist is somewhat debunked by Gilmour. In an interview in 1987, he speaks of how the label thought they’d been “sold a dud” because their attempts to get her to work with other producers weren’t going well. Gilmour suggested they go back to Powell, which is what happened and this got things back on track. But in David’s opinion, the label “wasted two years pissing around with the wrong producers… and claimed it was waiting for her to mature and all that sort of bullshit”. It’s an interesting insight, although whatever the reasoning, it surely worked in Kate’s favour to wait a few years before being thrust into the glare of the public’s eye.

In late 1977, EMI wanted to release the more conventional rock/pop of James and the Cold Gun as the first single from Kate’s debut album but the then 19-year old dug her heels in and insisted the Wuthering Heights was the one. That single was eventually issued on this day in 1978.

I would have been eight years old when the single was released, but with Top of the Pops a family institution at that time and watched by a large percentage of the population, I remember seeing Kate Bush perform the song quite clearly. And what a performance. Check out the clip below… Kate sings the song LIVE on national TV and has to put up with a frankly awful backing track (some convoluted ‘rules’ to do with musicians union) which is being played too slowly, in places. Incredible composure and maturity – this was how the British public were introduced to Kate Bush.

The song was number one for four weeks in the UK and hit the top in Australia, Ireland and Italy, too. Kate was on Top of the Pops many times as a result and here’s another clip where she’s sitting at the piano (still singing live)

Perhaps Kate’s greatest achievement wasn’t having a bit number one hit with her first single, but rather not letting it derail her career and become known as a ‘one hit wonder’. The Man With The Child In His Eyes (the master version was recorded when she was 15) was a strong follow-up and apart from the piano accompaniment, it was completely different in style. It reached number six in the UK charts and would win an Ivor Novello Award for “Outstanding British Lyric” in 1979. Further hits like 1979’s Wow, and 1980’s Babooshka proved that Kate was the real deal.

It did take her a while to move on from the public’s perception of her as the rather hippy girl with the very high voice who wrote unusual songs and this wasn’t helped by EMI who – perhaps wondering how long she could sustain a successful career in music – rushed her into releasing her second album, Lionheart, that very same year, 1978. Here’s a Kate spoof from BBC TV comedy show Not The Nine O’Clock News shown in 1980 called England, My Leotard which rather demonstrates the point!

By 1986 Kate had established her credentials as an experimental pop artist and producer of the highest order, with 1982’s The Dreaming and 1985’s Hounds of Love. After the latter – which unlike the former was a considerable commercial success – EMI wanted to put out Kate’s first greatest hits compilation. For reasons that have never been clearly explained, on 1986’s The Whole Story (still Kate’s only ‘hits’ set) Wuthering Heights features a new vocal and is also remixed. As a 16-year old in 1986, the year 1978 seemed like a lifetime away to me, but of course it had only been eight years since the original was released. Kate’s songs had moved on from the vocal gymnastics of earlier compositions and she probably fell foul of the artists’ opinion that something could be ‘improved’ or needed ‘fixing’. Here is the 1986 ‘new vocal’ version synced to the original video

I don’t think I’ve ever met anyone who thinks this improves on the original. There’s nothing inherently ‘wrong’ with it, but there’s definitely some charm and innocence missing.

When Kate undertook her run of Before The Dawn shows in 2014, the oldest material she performed was from 1985, thus a whole generation of fans will likely never hear Wuthering Heights performed live by Kate Bush. It would certainly be a challenge and Kate would undoubtedly have to change the key and rearrange it a little bit. But the song could take it. It’s a solid gold classic and is quite unique. We live in hope, in the meantime, happy 40th birthday to Wuthering Heights!

Below is the full interview with David Gilmour that I referenced at the beginning of this post.