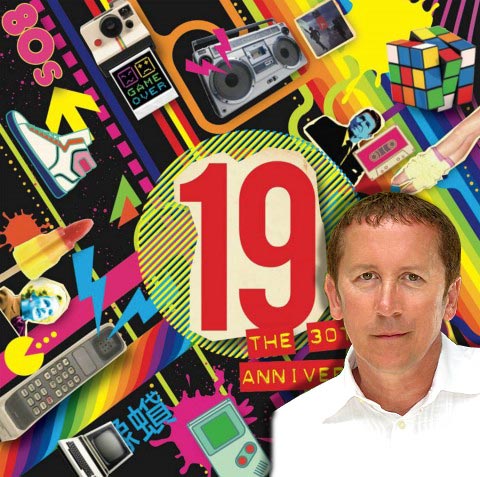 Paul Hardcastle‘s classic 1985 single 19 has its 30th birthday this year and to celebrate, the Ivor Novello winning musician and songwriter is issuing a special anniversary album featuring 14 different mixes of the anti-war song, with the proceeds going to charity. SDE caught up with Paul last week to discuss 19 and some of the remixes on the new compilation…

Paul Hardcastle: A lot has happened since then. I’m actually a chairman of a record label [NUA Entertainment] and the guy that owns it, Neil Utley, was a massive fan of 19 and I mentioned it was coming up to the 30th anniversary and he said “come on, you’ve got to do something…” So we decided to do it and to give the proceeds to a PTSD [Post Traumatic Stress Disorder] charity called Talking2Minds. So that was the reason I said yes. I didn’t really want to go back [figuratively] to Vietnam and Afghanistan and all that, and I thought the only thing that’s really relevant about that record now is the fact that lots of people are still fighting wars in their own heads, with PTSD. Panorama did this programme and in one year, 40 people died in Afghanistan, I think it was, and 50 killed themselves. That one fact was as powerful to me as when I very first made the record and found out that the kids were only 19.

SDE: You and I had a plan previously to put out a three-CD set that was going to be quite comprehensive [this never worked out due to foreign language masters not being available]. With this 30th anniversary release, how much effort did you go to in seeking out some of the original mixes like the instrumental version? Obviously you don’t have all the original period mixes on here…

PH: To be honest with you, I wanted it to mix it up and I wanted the new stuff on there as well. At the time when we were looking for The Final Story Requiem mix they didn’t even think they had that, so it was a battle. You’re talking about a 30-year old record and some of them probably aren’t even alive who were working it then. Like you, I had a hassle trying to track stuff down and you think ‘is it all worth it?’. So in the end I did what I could and I think it’s got a good balance on there.

SDE: Is the PTSD mix the only actual ‘new’ mix?

PH: No I’ve changed the Electronica one, and then there’s one called 19: The Rage…

SDE: So The Rage a new mix too, then?

PH: Yes, that’s not been around before.

SDE: I noticed that the ‘Inner Changes’ mix appears to be the same as Victims of War Part 1 from 2010?

PH: Yeah… Inner Changes [another track completely] was done from that mix and it’s got no narration, and that’s become a very big record for me in America, so I basically just thought it’s nearer to that than the Victims of War one – I mean Victims of War was very, very rare. I think I might have put a slightly longer version on the new CD.

SDE: In 2010 there were so many remixes made available digitally, on iTunes and Amazon etc. How did you keep track of all the different versions? There was an incredible amount… did you do all of them yourself?

PH: A lot of them I did myself, for the 25th anniversary. But that anniversary was really messed up by the fact that I’d just put the record out right in the middle of an election. So I wasn’t allowed to be in the papers that much at that time because of it.

SDE: The new compilation starts off with the Destruction Mix which was the second twelve-inch in the UK – was that one of your favourites?

PH: I think that’s my favourite version of 19 from the original versions, but I have to say I really like the one I’ve called the Cryogenic Freeze Mix. And then obviously you’ve got one featuring Marvin Gaye, which is new because I’ve added more vocals to that. And I really like Electronica Dark Remix, it’s based on the Electronica Mix but I’ve added stuff to that too, so some of my favourites are on the album.

SDE: There was no problem getting clearance to use Marvin Gaye’s voice?

PH: I’d had clearance three or four years ago. If you remember I put this out as Rainforest featuring Marvin Gaye and the fact was it made sense to do it since both songs were about Vietnam.

SDE: Tell me about the Jim Pavlov Edit?

PH: A guy called Jim Pavlov did a remix for me – he said ‘is there any chance of having a go?’ I’d seen the guy before, do his stuff on YouTube. So I thought I’d give him a bash at it. He made it 9 minutes long, it was much too long, so I reedited it and cut it down and thought I’d use it – because it was different.

SDE: There was a DJ Remix in 2010 that I thought was really good. It was speeded up quite a bit…I was hoping that might make an appearance.

PH: Do you know what… I was signed to Pacha a few years back and I let a couple of their DJs remix it, so it might have been one of them. The thing is Paul, to put everything on there it would have had to have been a 20-disc box set! So I just thought let’s get what my favourite mixes of it now – you just can’t please everyone all the time! But at least this is the first time a lot of these mixes have been on CD. And it is the last time, I promise you that! People will be going ‘thank God for that!”

SDE: You’ve got the original demo on here, recorded in your Mum’s front room. Take me back to that time when you were creating it – how long did it take to put together?

PH: It started off with a [Roland] TR-808 drum track. We’d hired a TR-808 for another project and I thought ‘you know what, I’m going to program a few beats’ – that’s why they don’t change that much! So it started off as a drum track and after watching the TV show ‘Vietnam Requiem’ I took all the parts from that which I’d recorded on a Betamax and then recorded that to a Revox quarter inch tape and spun in all the bits onto the recorded track. And I think I told you, the only reason it was ‘In Vietnam he was 19’ was because I had an Emulator II which only had two seconds of sampling time, which is ludicrous when you think about it. But I suppose it was lucky, because if I’d had an hour’s worth of sampling time I might have chosen something different and I’d never have had the hook. So I put all the bits together in my Mum’s front room and took it to a place called ‘The Sound Suite’ in Camden and we bounced it over from an 8-track Tascam that I had to a 24-track, and we soon filled up all 24-tracks. Mixing it without automation was all hands to the pump!

SDE: And you had a deal with Chrysalis at this time, didn’t you? Famously, they didn’t want 19.

PH: Yes they didn’t want the record. It was like ”what on earth is this? You’re bringing us some crazy track with a guy going n-n-n-n-n-nineetenn!” It’s about the Vietnam war and it’s as stark as anything, talking about brains being blown out. And Simon Fuller who was working there said “why don’t I basically just leave my job here and become your manager” – and that’s how I got to meet him and that’s what started off the massive company 19 Entertainment.

SDE: So The Final Story – what’s going on with that then? Why didn’t you just put the full version on here and then you’d have had at least the three original UK 12-inches?

PH: Well, do you know what, in hindsight maybe I could have. But if I’m really honest with you I prefer the ‘Requiem’.

SDE: But ‘Requiem’ is really just the second half of that whole mix, isn’t it?

PH: It is, but after listening to it at the end I thought it really sounded like the Destruction Mix a lot…. so you know, that track is out there if people want to listen to it, but as I say it’s hard to please everyone.

SDE: Is the PTSD Mix going to be promoted as any kind of a single, or anything like that? Or are you just doing the whole social media thing and putting it up on YouTube?

PH: It’s mainly that. To be honest with you no one would play the PTSD version – it’s a bit heavy, especially the video. We’re half promoting the Marvin Gaye one to radio and the other one on social media. It’s not a massive full release though, this is more about the album, really.

Thanks to Paul Hardcastle who was talking to Paul Sinclair for SDE. 19: The 30th Anniversary Collection is out now.