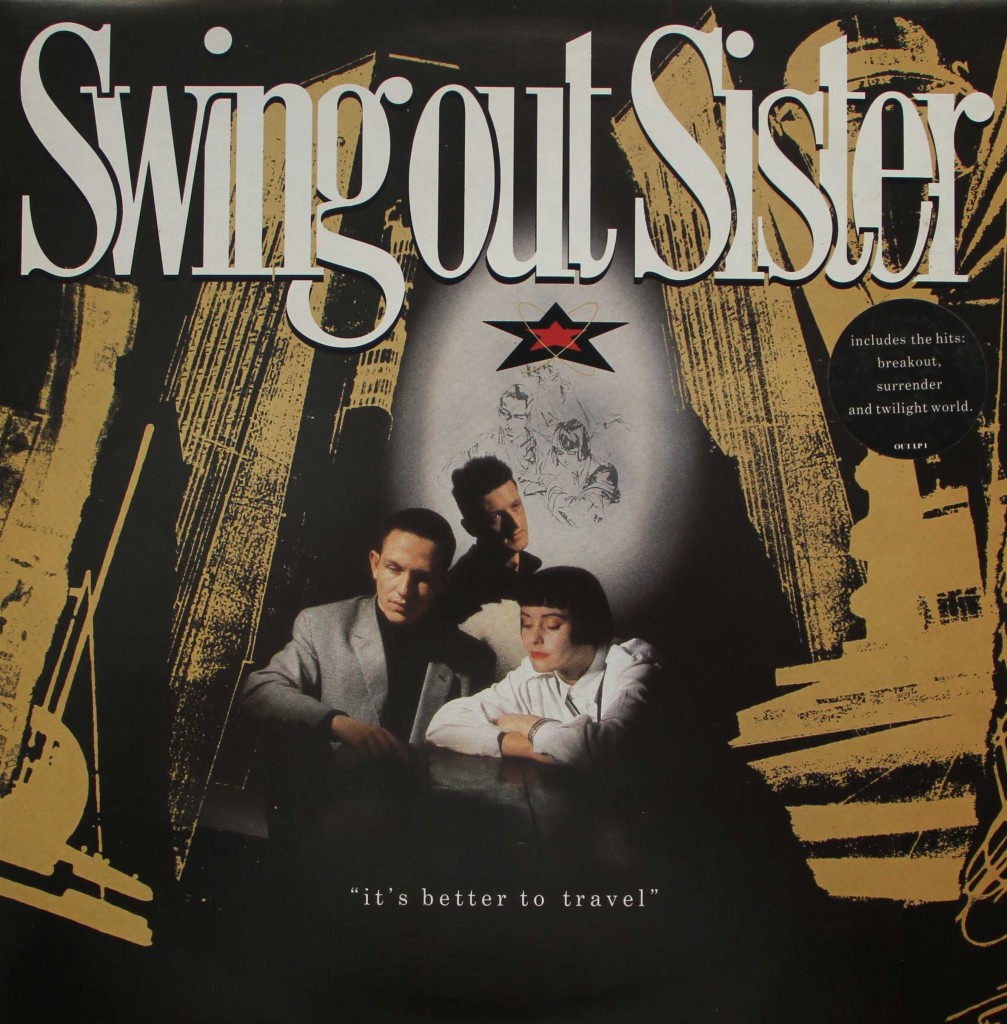 With their classic debut It’s Better To Travel due for a 25th Anniversary reissue on 16 July 2012, Corinne Drewery and Andy Connell from Swing Out Sister give us an exclusive track-by-track  guide to the album, remembering people, places and influences along the way. 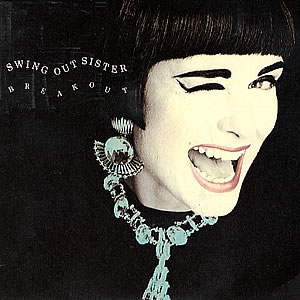 Andy: It was Paul O’Duffy [the producer] who suggested we do Breakout with horns. That wasn’t an option as far as we were concerned, but of course it was the horns that made it. Originally, that was going to be a very synth driven track, it was going to be a World Cup theme, that was the original idea. It was the 1986 World Cup at the time, and ITV had the worst theme – I just couldn’t listen to it. So I’d turn the sound down on the TV and I’d sit there with a DX7 [classic ’80s synth from Yamaha] and make up a theme that I could play instead of watching the TV version! And that became the original backing track.

It’s the only time I felt that we’d have a hit. Nobody else did though. I came home and I said to everyone we knew, if that’s not a hit, we will never have a hit. It’s the only time I’ve ever been so sure of something. The record company said it’s nice, but it’s not what they are playing on the radio – but the radio loved it for exactly that reason. The label even took Breakout to a top producer in the US and as a consultant, he came back with a report that saying “that snare drum will never work in the United States.” 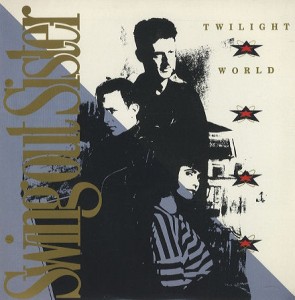 Andy: It’s one of my favourites. I think Richard [Richard Niles, string arranger] did a wonderful job on that. The strings on that are superb. I didn’t want the seven-inch version on the album, this is the version [Superb, Superb mix] – the way it starts, the way it unfolds, the strings at that point are just singing.

Corinne: The lyrics came from a friend of mine. We’d been living in this squat when we were at college and her mum came to see us and she said “I didn’t bring my daughter up to live like this – you’re living in a twilight world”. I just loved the way she said it in a thick Lancashire accent. I never thought anything more of it, but it came out years later.

Andy: That was me sneaking in some Weather Report… [US Jazz Fusion band from the 1970s/’80s]

Corinne: (to Andy) I didn’t know anything about that! I remember you were playing with those chords for a long time. At the time we were writing the demos for the album and I think I was staying at either at your house or Martin’s house [Martin Jackson – drummer and part of the original trio] or sleeping on someone’s floor, so I was always going up to Manchester on my own, so it seemed like a rather solitary song. But I remember having a fight with Paul O’Duffy because he put some Spitfire sounds at the end of this and it’s quite an intimate song. I think our songs are quite asexual actually, but I told him it seemed too macho – it’s got to be more gentle. So he said, okay you can have fruit bats then!

Andy: If you ever hear the sound of a jet – and there are many of them on the remixes – that’s all Paul. If he can get an inappropriate sound of a jet on anything, he will (laughs). 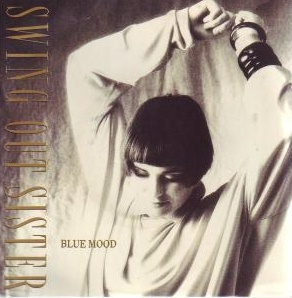 Andy: I have very fond memories of it, but to be honest the truth of it is that we didn’t really know how to write a song…

Corinne: There were thirteen bars somewhere that were driving me nuts. Everything had an uneven amount of bars and Andy was still in A Certain Ratio [post-punk Manchester band signed to Factory Records] when we worked on this tune, and he was off on tour with them, in Holland somewhere. So Martin and I were left to work on it, and I remember ringing Andy up saying how am I supposed to write a verse and chorus to this?

Andy: It’s in the blues tradition, where you just go when you feel like it (laughs). What I hear in this song, in the chorus, is the first sign of exuberance. A lot of people who don’t like what we do take it to be jollity. But for me it was important that exuberance was in there. The chorus is well realised. The rest of it doesn’t hang together, but when you first hear Corinne singing, there’s sunshine there, and people don’t like that about us (laughs).

Corinne: A lot of people have said that they have this as their ‘going out’ record, or get up in the morning and put you in a good mood record. I remember going to a club and it was playing over the sound system I went and hid in the toilet. That was a very weird feeling.

Andy: This is the first one I ever heard on the radio. We were in a studio in Chorlton [suburb of Manchester] called Drone and someone had said they might play it on Piccadily Radio. To hear your record on the radio for the very first time is such a thrilling experience. 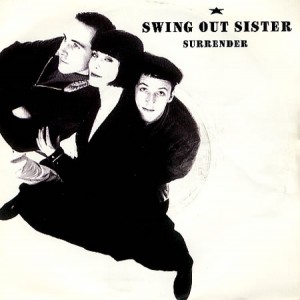 Corinne: I don’t think Andy really liked this one very much at the beginning, it didn’t go enough places for him. It’s a bit more of a groove track, but I like this, and I think I wanted to be Diana Ross and The Supremes all rolled into one. We had these backing vocalists in the studio – Andy and Paul had gone out for something to eat – and I asked them to sing ‘Surrender’ over and over again like they were in the Supremes, so I was really pleased that we had Shirley and Dee, the backing singers, on this one.

Andy: It was important to us not to be a one hit wonder, although as the years have gone by we’ve become that, because nobody remembers the second one. I thought it was great. It didn’t have the thing that Breakout had, but it had another thing and it seemed like it would be good to broaden our palette a little bit. The label did a clever thing by releasing it in February when nothing much was going on, post-Christmas.

Corinne: We weren’t really that bothered which tracks were picked as singles, we’d just see what the record company liked. 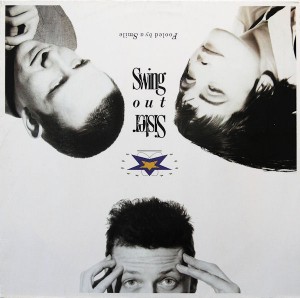 Fooled By A Smile

Andy: I love bits of it, but it’s too perky for me. Originally it wasn’t, but somewhere along the line it just got… too perky. Lots of people love it. We don’t do it on tour because we’ve never found a way to ‘de-perky’ it, but it is very requested.

Corinne: There’s some very clever arrangements on it [Richard Niles again] but it’s all too condensed – it just needed spreading out.

Corinne: It was a time of experimentation. This album was like putting all the ingredients together, but we hadn’t quite got the recipe. Every song was coming from a different place. By the time we got to the second album we had a bit more of an idea of what we wanted to do.

Andy: For me it’s the very first attempt at Morricone. Certainly the middle bit. This whole album was about us trying to find some common ground. The one that is very obvious is John Barry. Not in this song particularly, but the other one is Morricone. There’s Once Upon A Time in… something in there (laughs).

Corinne: I think the same thing. I reacted to the sound of what Andy had put down musically. Lyrically, I don’t think I meant it in any kind of Catholic sense. I don’t think I’m particularly religious – it was more about a coming together. One day I’ll get around to analysing what I actually meant, but I honestly don’t know what I lot of these things were, they were just things swimming around in your head.

Andy: I think we thought it might be a single. There’s the germ of it. It’s very clear to me on listening to this what it’s about. Before we did this, Martin and I did a UK Electro album – they sold it as a compilation to the UK Electro scene, but it was just me and him doing stuff. We were listening to a lot of music like Shannon Let The Music Play, and the SOS Band, Just Be Good To Me so that was a big influence. It’s Not Enough didn’t come out the way I thought it should. It somehow got ‘rocky’ with the guitar in it, and it became another thing, whereas I wanted the full-out synth thing going on. Again it’s one of those where you put it in the mix and it runs away from you a bit.

Corinne: I think the balance wasn’t quite there yet with this album. There was a lot of ambitious contributions. When we got to the second album, we got the balance a bit better. Picking up on the thing with the rocky guitar, this album, believe it or not, was very influenced by Michael Jackson. So using a rocky guitar on a dance track was all from him, Rod Temperton and Quincy Jones.

Andy: I tell you what is in there – Steely Dan. If you listen to the guitar, it’s absolutely Steely Dan. It’s so well observed, I didn’t even know it was there.

Theme From (It’s Better To Travel)

Andy: They’d given us a budget, and we had some left, so we went to a residential studio, Great Linford Manor. There’s only nine tracks on the album, and at this point we thought we needed one more. I think all of us, over the course of this record, had decided that the thing we have in common is John Barry. If there is one thing we can unite about, as opposed to just bickering, we can ‘do a John Barry’. I don’t think we actually sat down and said that, but we all got what we were doing. It was just great fun.

Corinne and Andy were talking to Paul Sinclair for SuperDeluxeEdition

We are giving away a signed vinyl copy of the original issue – details on our Facebook page.