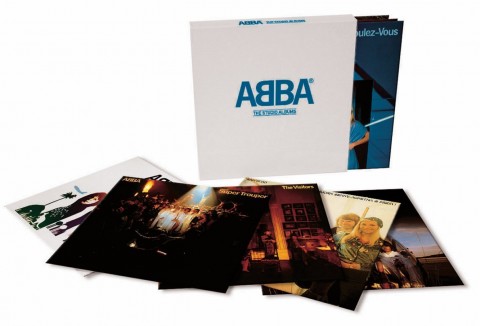 Having issued the 40th anniversary singles vinyl box, Universal Music/Polydor – in their role as custodians of the Polar Music catalogue – were always quite likely to put out an ABBA vinyl box set featuring the original studio albums, and at the end of next month that is exactly what is going to happen.

ABBA: The Studio Albums continues with the big ‘4-0’ festivities and packages all eight original ABBA albums (pressed on – what else? – 180 gram vinyl) inside a sturdy outer slipcase. The set kicks off with 1973’s Ring Ring and ends on The Visitors from 1981.

Unfortunately, there is no ninth bonus album with rarities (as was the case in the cheap-ish The Albums CD box) so vinyl lovers have to be content with the original running orders and no extra material. Mastering isn’t confirmed (although it’s reasonable to assume the latest digital versions available will be utilised) and it is not clear if a MP3 download card is included, although this is highly likely.